For Razzle Dazzle Afternoon at “The Russian Tea Room” 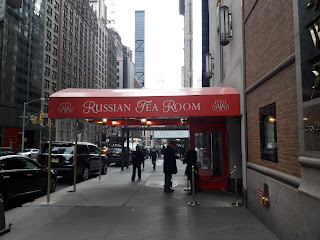 The Russian Tea Room turned ninety years old last year. Luckily I was able to visit to celebrate. Celebrate them, celebrate me, and celebrate Christmas Eve; some of my favorite things.

The Russian Tea Room is an iconic New York City landmark, and for good reason.

I have heard about this place, this restaurant, for as long as I can remember. It is a place I never thought I would actually get to go to. It sounded like a magical, mythological locale where only the creme de la creme went. But now I am officially part of the club. 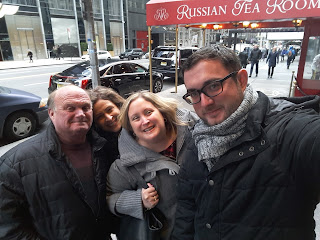 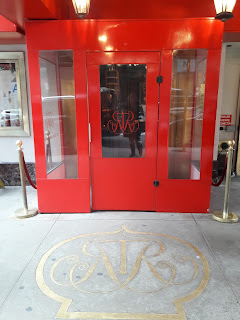 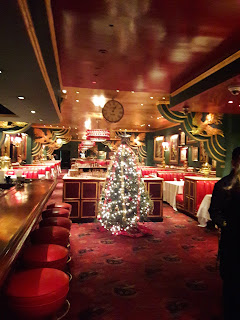 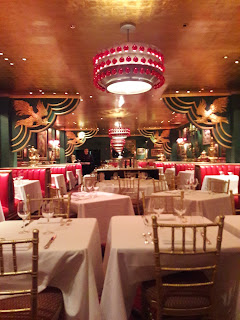 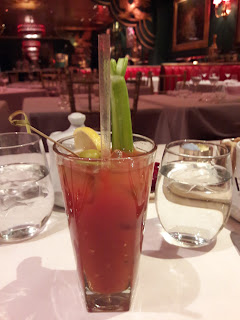 Both mine and my brother’s birthdays are at the end of December so I wanted to find a location where my family could have a special celebration. When I checked my annual to do list (http://bit.ly/2s4Ydji), as I commonly do when looking for a new place to go, I was reminded of The Russian Tea Room. The rest as they say is history.

It was Christmas Eve morning. We were all in our Sunday best. It was a frigid morning in N.Y.C. but you could feel the festive nature nonetheless.

People were out finishing their shopping, tourists were out and about taking in the sights, and the Milley family was hungry. 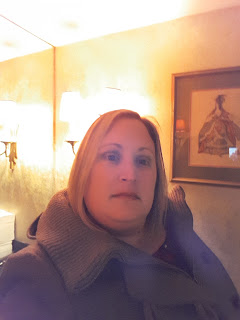 I could hardly hold in my excitement. But why should I? This visit had been so long in the making.

We arrived a bit too early so we had to wait for restaurant to open however I could tell from the outside how much glitz and glamour awaited us.

Since our reservation was of the one the first of the day so we were seated on the first floor, in the picture perfect red booth right behind the Christmas tree. I couldn’t have picked a better seating arrangement myself. 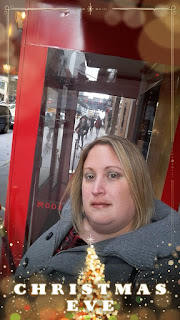 Oddly enough it was a group of dancers who worked at The Russian Imperial Ballet who opened this restaurant in 1927. There are still three floors each with a room that holds anywhere from twenty to upwards of three hundred people. The first floor is probably the smallest but still very much ornately designed and decorated. Sadly I am only know finding out about the bear shaped aquarium located on a floor above. The giant glass bear is the signature logo of The Russian Tea Room that contains some few fish swimming around within it, what a truly innovative idea. My server informed us that the designer of our doggie bags was the same person who designed the Yellow Submarine Beatles’ album; small world.

The Russian Tea Room has been home to the immigrants from lands such as Russia and Poland. Those first visitors came to get a glimpse of what they were missing and find food they could afford. 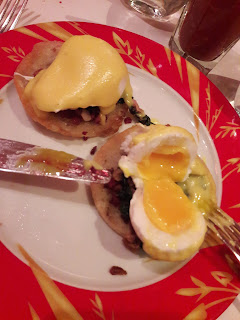 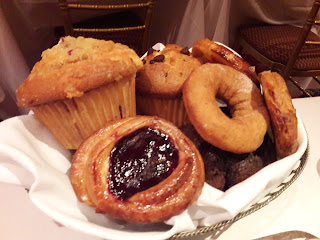 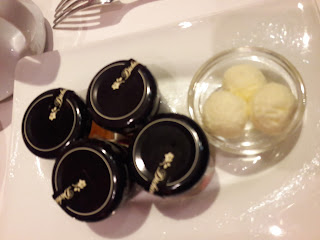 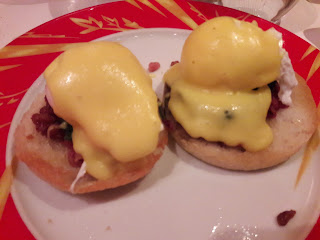 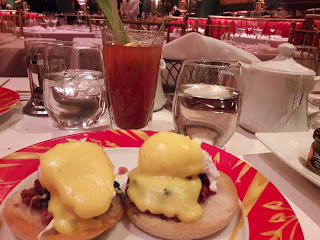 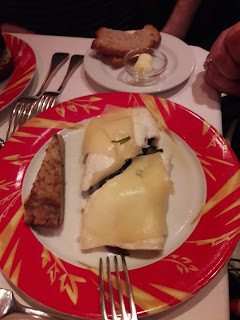 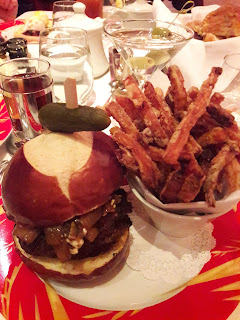 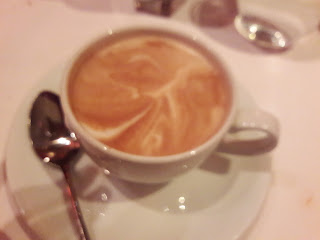 Not long after this restaurant became a hangout for those experiencing their fifteen plus minutes of fame. For instance you can see the booth where Dustin Hoffman filmed a scene for Tootsie, see the inspiration behind the movie Manhattan, and the coat check room where Madonna worked way back when.

We began our brunch with the Mixed Basket of treats that included one of each of the following: croissant, pain au chocolat, blueberry muffin, pain aux amandes, raspberry danish, and a glazed doughnut.

This was the perfect starter kit!

Everything was so fresh and warm. I had the danish first and then half of a blueberry muffin. The basket was really full. We had so much food left over we ended up taking most of this portion of the meal home.

For an entree, my father and I both had Eggs Florentine, which was a toasted English muffin with crumbled bacon, spinach, poached eggs, topped with hollandaise sauce.

I LOVED my choice!

Ordering had been confusing for me and I have to say looking back I don’t even think it photographed as well as it tasted. To say it was served on an English muffin conjures images of what you have in your refrigerator but that would be false. What I ate was nothing of the sort. The restaurant’s version was some of the best bread I have ever sampled. I was so pleased that the bacon was served crumpled to bits and well done, now I want it that way every time I have some. The poached eggs were perfection and the hollandaise sauce was on point.

I think my father enjoyed his too because it disappeared so fast from the table I almost forgot he ate.

Both my mother and brother enjoyed their meals as well. Personally I think the burger looked too well done and dry, even though I prefer my red meat cooked until it turns black. I didn’t taste it though. I did however sample the sweet potato fries and they were the best I ever had!! They were actually sweet, not like candy, but like fries sprinkled with love. 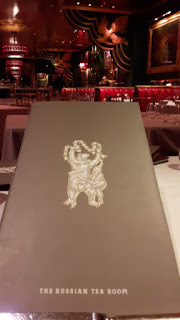 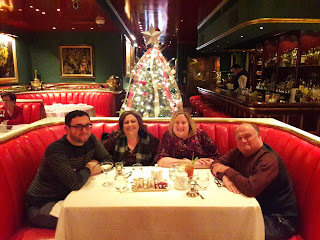 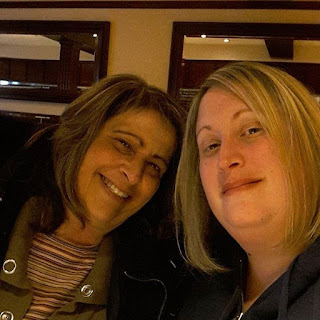 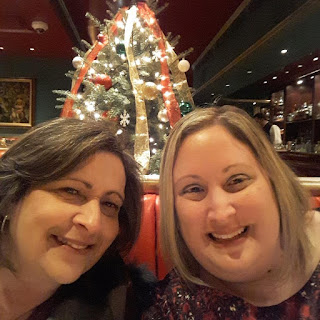 If ever I get to eat here again and I find myself face to face with that glass bear I plan to dig into the legendary cherry and cheese blintzes. 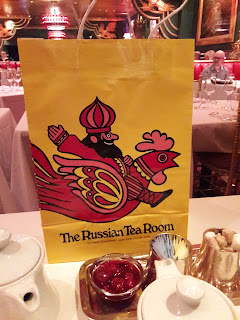 This brunch was a lovely way to start our day. We had another activity scheduled nearby afterward so we were some seriously busy, bustling, celebratory folks that merry day.