For Find Out Friday - How Did a Legendary Artist Get Away With Copywriting Another Famous Face? 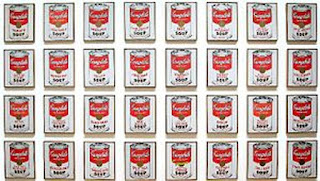 As a businesswoman and entrepreneur I am always trying to learn as much as I can about the laws that govern and protect creative rights. I continually tell my family and friends that I believe in prenups no matter what you do or where you are currently are in your life because many things can change over the course of a lifetime and I believe in being protected.

As a creative person, an artist, a writer, the thought of someone using my words, essentially my life source, without giving me the credit is horrifying. The stealing of intellectual property is like being gutted from the inside out.

If you have ever seen the movie featuring Michael Keaton, The Founder, you might share my fears. The Founder tells the story of McDonald’s and how it went from a family created and owned business to the corporate conglomerate it is today. The story is not pretty and still makes me sicker than the food does whenever I pass a golden arch. It is a film that has been greatly influential in my life. It also happens to be a hell of a movie.

Thoughts like these swirl around my mind consistently. They make me question so many other things. Today’s Find Out Friday topic is one of them.

I have been long wondering; how did a world renowned artist get away with copyright infringement on his most celebrated works? In other words, how was Andy Warhol, known predominantly for his use of Campbell’s soup cans in his art, able to use those images without any legal action being taken against him? Or had there been? I no longer was able sit back and wonder. 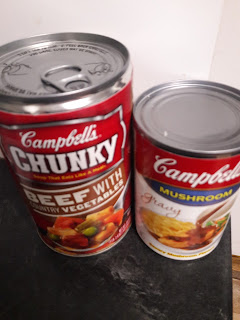 I have no real affinity for soup. If I am ever going to eat it I am going to make it myself from scratch. Any of you who follow me on social media #dinneralaDonna will be familiar with my methods of madness.

For that matter I have no real affinity for Andy Warhol either. I don’t quite get him or his art. Why its worth so much money also boggles my mind, while Vincent Van Gough, a personal hero of mine, didn’t manage to sell a single painting during his lifetime. Clearly there is no accounting for taste. Speaking of which, that is another reason why I don’t eat anything that comes out of a can.

Andy Warhol’s first real success came in the early 1960s following his recreation of Campbell’s soup cans. Warhol was apparently a fan of the soup. Allegedly he ate their tomato soup everyday for lunch for twenty years. And you know what they say, write or I guess paint what you know.

While many of the late artist’s friends claim to be behind the suggestion to that led to these creations, the one with the most proof is Muriel Latow. Warhol even cut her a check for fifty dollars as payment for the idea. Turns out she should have held out for more.

At first very the soup cans Warhol created were identical except for the label featuring the flavor. At that time Campbell’s had only thirty-two varieties. There are now over ninety-two flavors in that original collection.

In order to make his creations Warhol first hand painted each individual canvas. Later on he would move on to a photo-silkscreen process which would become his signature.

When it came time for these images to hang in the Museum of Modern Art (MOMA) in New York City, Warhol provided no instructions for the order in which they were to hang. So MOMA did the logical thing and hung them in the order the flavors had been created. The tomato soup was launched first in 1897.

Officially Warhol never asked permission to use this brand’s signature look in his art. But Campbell’s never sued either. Being as this was Warhol’s first success and launched his career, it appears Campbell’s was happy to ride on his coattails receiving a free endorsement.

Campbell’s also has no official record of who created the infamous label. Instead they claim it was a group effort.

This photo is a copy of the letter sent to Warhol proving that the brand was aware of his work and even a fan of it. 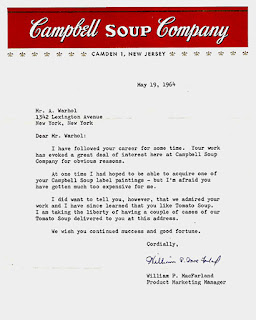 The more I read it the more I was stunned by it. That would never happen today.

Copyright law have a three year statute of limitations meaning that Campbell’s had three years to sue Warhol if they choose to do so. After that they would have no case. The only matter the two estates came to agreement on was a joint project called the Andy Warhol Scholarship Fund along with the New York Academy of Art established in 1987.

In an ironic twist there has been one brand that hit Campbell’s a little too close to home and its one I am fond of; Chicken Soup for the Soul. Apparently the title, graphics, and product lines too closely resembled our favorite soup company so they went to court for what else? Copyright infringement.

The deal they struck remains private between the two parties but I suspect a significant amount of money changed hands for the case to be dropped.

The moral of the story is this: promote a brand and they’ll be your friend for life. Cross The Queen of F-cking Everything and be happy if all I do is sue you.