For the Sanctuary of Italian Feast Delicacies: “The House of Pizza and Calzone” 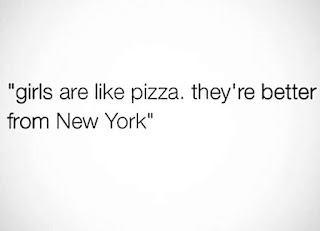 
There are temples, churches, mosques, and other typical houses of worship. But when I want to pay a visit to the Mecca of my soul, I visit the House of Pizza and Calzone.

I kid you not. 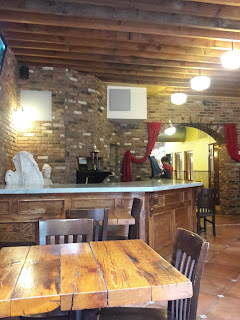 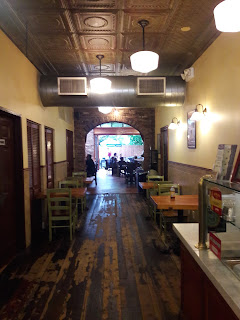 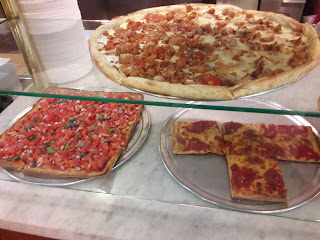 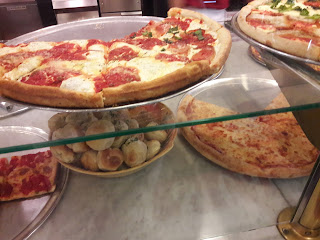 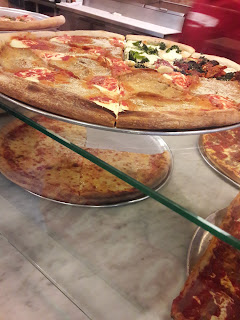 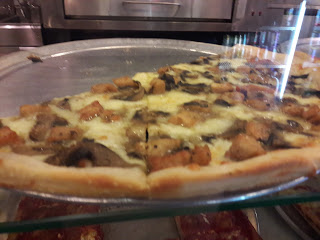 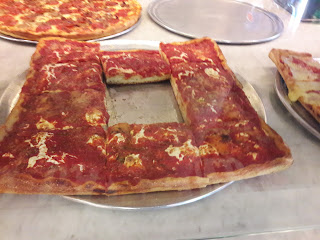 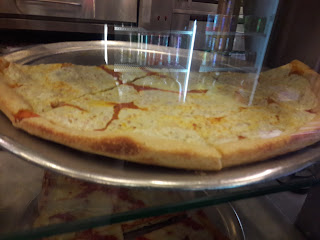 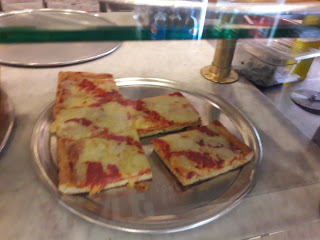 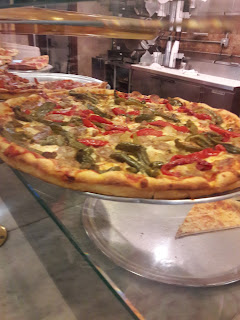 Of course these experiences do not take into account the pizza I eat from local spots. If I am being honest, I eat pizza at least once a week. Writing this blog might increase that to two soon. 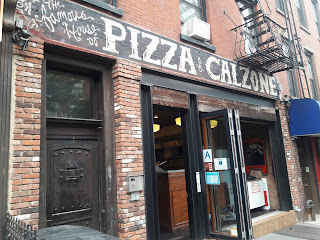 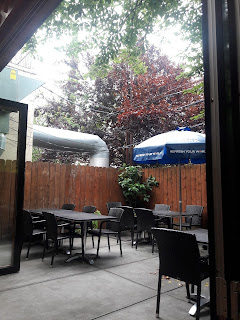 With so much pizza love and knowledge it is a wonder I can still be surprised by anything new.  But my latest outing has been one of the most significant in recent memory. In fact I have been talking or thinking about it just about every day since my visit. I am talking about another item I have checked off my annual to do list (http://bit.ly/2s4Ydji); The House of Pizza and Calzone. Yes, there is a house for such things. 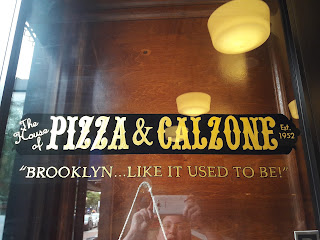 The House of Pizza and Calzone has stood in its location on Union Street (in Brooklyn) since the beginning circa 1952. Originally called Simone’s it was sold to pay off a gambling debt to two employees who then renamed the restaurant. The restaurant at the time it was won was only two years old. The former employees, Giovanni and Onofrio, were from the Apuglia region of Italy. That region is known for one of the specialties of the restaurant’s title, the calzone. I think that the history of the calzone was the only pizza related mystery I hadn't yet solved until today. 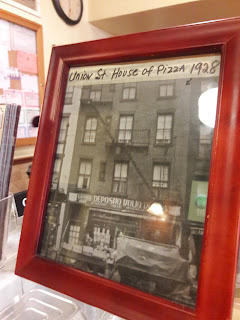 In 2004 Giovanni and Onofrio decided to retire and sold the business to Paul DiAgostino and Gino Vitale, who still own it today. The new owners have expanded the restaurant to include fifty seats in the rear as well as some outdoor seating. I had noticed a second pizza oven that looked brand new back there. Apparently there are plans to expand the business to add a full service kitchen so that a full family dining experience can be had by all. DiAgostino and Vitale have already added paninis, sandwiches, and desserts to the menu but tradition holds steady. The original recipes are still used daily which is why many from the neighborhood who have moved away still come by for a slice. Giovanni and Onofrio still come by as well. 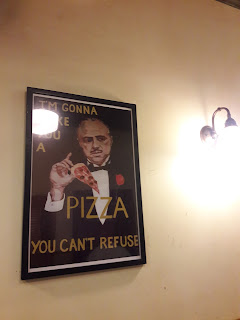 Much like Boudin Bakery in San Francisco, you can smell the goodness awaiting you when you walk anywhere near The House of Pizza and Calzone. The glass countertop had numerous kinds of pizza already made, making your decision that much harder. I even saw pizza variations I have never seen anywhere else such as their sausage and pepper pizza that closely resembles what you would see on a hero when you visit an Italian street feast. Back in the day that was the only place to get a calzone or slice of pizza of the likes of what I found here. 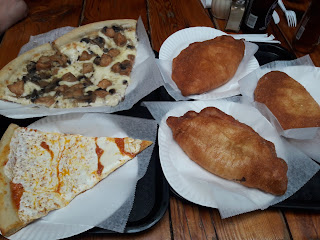 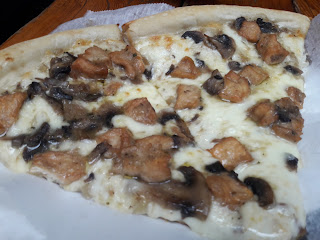 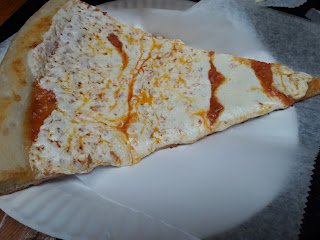 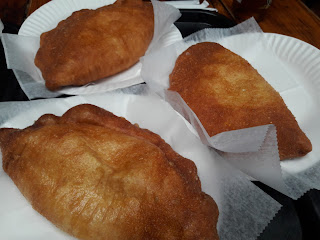 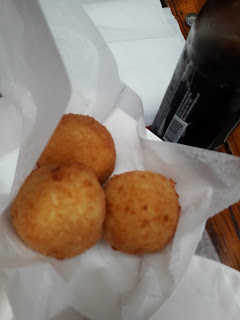 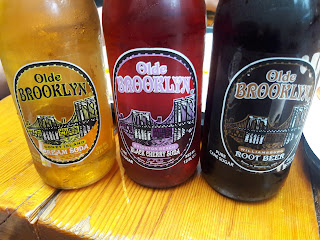 My parents, who accompanied me on this blog visit, spend a few minutes oohing and aww-ing and then finally had to make a choice. My parents both got a slice of chicken marsala pizza and I got what I thought was a regular slice with fresh mozzarella. However, mine ended up having vodka sauce on it instead of marinara sauce, which made me even happier.

We each all got a calzone and a rice ball. Rice balls are another great love of mine and I am always looking for the next great one.

The calzones are deep fried and filled with ricotta cheese and ham. You can add anything else you want or choose to have one made without the ham, unless it is a Friday and as per tradition no meat is served in them on those days. But we went with the standard.

We split one calzone and took the other two home for dinner. Despite being fried, they weren't greasy in the least. The cheese was rich and flavorful and there was a small piece of ham folded into each. I could have done without that part because I am not a big ham eater, but it was easy enough to remove. It did indeed have that “feast” quality I remember cherishing every time I got to have one this good. It has an old world flavor and is one of the very few things that have not changed in these crazy times.

The rice balls were good but not overwhelming so. They had a good crunch but the cheese blend inside need more seasoning. The ones at Patsy’s are far better.

As for the pizza, there is a reason I saved it for last: it was the best! Not only the best part of this meal but the best pizza I think I have ever had. The only slice that comes to my vodka sauce, fresh mozzarella slice can also be found at Patsy’s. They are both pretty fantastic.

I did managed to get a bite of the chicken marsala slice before they both disappeared and that was unbelievable!! I have since tried the version at Pizzaiola, a place I normally enjoy, and it was awful. Awful by comparison? Probably. But once I know better, I expect to eat better. 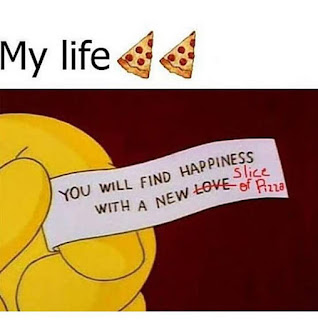 There are some meals I look back on that I raved about years ago that I would never dare to eat now. I am just lucky that my job is to consistently seek out the best of the best.

Back in the early 1950s calzones were only a quarter and a slice of pizza could be bought for only ten cents. Oh how I wish.

Although the prices may have changed, anything you eat at The House of Pizza and Calzone is still worth every cent!