For a Restaurant That Puts the Barn in “Moderne Barn” 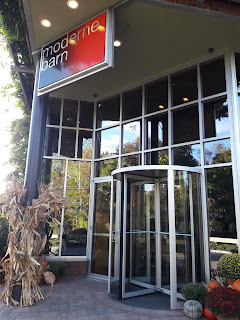 Whenever someone does something that isn't up to par, a common question is “were you raised in a barn”? Of course the answer is more than likely no. 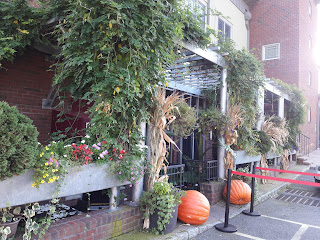 But what if you were to eat in a barn? If you are picturing Old McDonald and his crew you've got the wrong idea. At Moderne Barn there are no farm animals present (if you ignore the menu) and the interior is full of dark wood and glamour. The spiral staircases on either side of the main dining room have cabinets full of wine. For some reason it reminds me of Beauty and the Beast, when Belle is exploring the library in the Beast’s castle. It has a romantic rustic appeal. The lighting is dim and the light fixtures offer much charm. Sadly that is where the list of positives end. 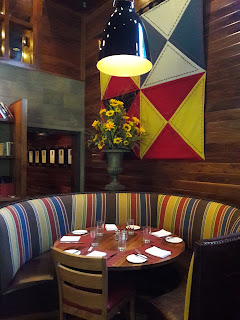 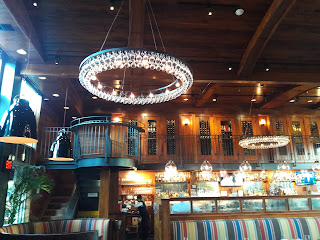 While I was super excited to have dinner here I would leave much less thrilled and still a little bit hungry.

I had thought a good deal about what I would order and I started with the warm house made pretzel bits served with gruyère cheese fondue and brown mustard.

Sounds fancy doesn't it? Thats what I thought.

The first thing wrong with this dish was the presentation. The pretzels were placed in what looked like an escargot plate, you know the kind that has several dips in it to hold the food. 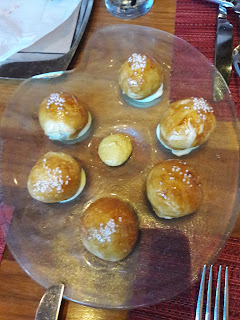 There were about six bites on the dish with a small dap of mustard in the middle. When I picked up a bite there appeared to be mashed potatoes underneath. Of course it wasn’t, it was the gruyère cheese. I mean I assume that it was supposed to be but it not only looked like mashed potatoes, it also tasted like it as well. It was fluffy and bland, which is not my typical experience with gruyere. 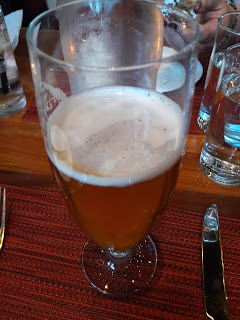 As I waited for my entree I smelled so many delicious scents all around me. I sipped my Lindeman’s Peche, a Belgium ale, I have rarely come across but always adore. It would be the best thing I tasted all evening. 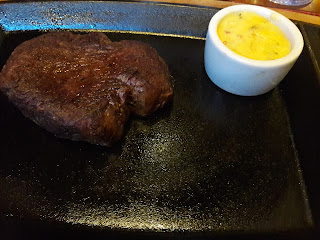 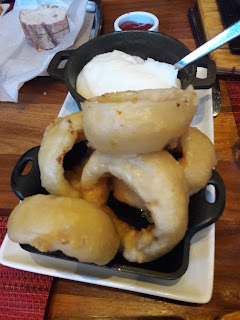 When my entree was placed down before me I instantly knew I wouldn't like it. It just didn't look like something you couldn't wait to sink your teeth in. I wanted to order something special this evening so I had chosen the filet mignon with a side of beer battered onion rings. Allegedly the steak was from Allen Brothers in Chicago which I took as a good sign but it wasn’t. The steak had bearnaise sauce on the side. That is usually something else I really enjoy but it was too tangy. On top of that, the steak was tough to cut and could be chewy at times. The onion rings were thick and under cooked.

Contrary to my experience, Zagat had this to say: “new American menu that has something for everyone………it's the closest you'll get to a NYC restaurant scene in Westchester.”

The New York Times had similar kinds words and was impressed with the decor and the meal they had. It is important to note that this review was written back in 2010 when Moderne Barn first opened and also ordered none of the menu items I did.

I don’t know if I caught Moderne Barn on an off night or whether or not they have slipped up in the last seven years. Perhaps I chose the wrong items on the menu to order.  Maybe I should have gone with a salad or a pasta dish. Or maybe, just maybe, when one of the most expensive items on a menu isn't up to your standards with what it should be, maybe the chef was schooled in a barn.