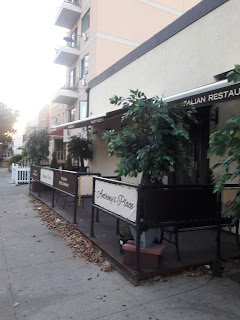 Well, kids another one bites the dust. I can cross Anthony’s Place off my 2017 to do list (http://bit.ly/2s4Ydji). This Italian eatery in Brooklyn finally got to have me as a guest this past week. It has been opened since 1994 and as of last year relocated to its current location down the block from the original location. Friends of mine had first mentioned Anthony’s Place to me several years back as a great place to get Italian fare that was something to write home about. 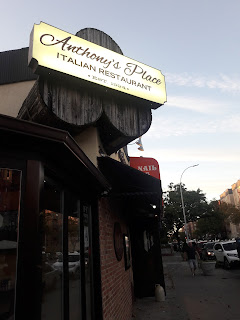 I instantly loved the decor. It is like a historic cabin in the countryside. There is lots of attention paid to the little details like the barrels that hold up the bar, for instance. There is a main room as well as one off to the side but both seem comfy and inviting. The staff was unbelievably personable. The only thing more impressive was the large menu.

I decided on the chicken parmesan with a tossed salad. Their many, many entrees are served with your choice of a side of pasta, salad, or vegetable. This flexibility, without any additional surcharges is not what you usually find in most spots. Right off the bat things were going swingingly. 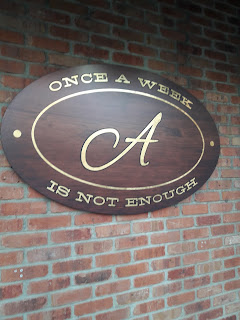 For those interested in a price fixe menu there is a great one here. It is offered on Wednesdays and Thursdays and offers you a choice of soup or salad, pasta, an entree, and dessert for twenty-one dollars. That is a great deal and a great amount of food for that price. Entrees here are about fifteen dollars, also a good deal considering you can get pasta or any other side you want. Another bonus to going on a Wednesday is that it is Wine Wednesday and bottles of wine are half price. 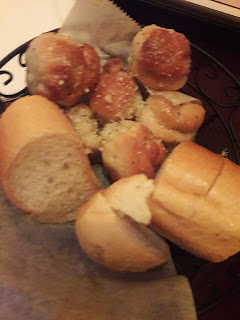 The food took longer to arrive than I expected, plus I was starving so that didn't help. I did manage to eat the garlic knot like bread they placed on the table but I would have preferred they were hot and did not have poppy seeds on them. However it was nice to have a choice between these and the standard loaf of ordinary bread you are normally given to begin your meal with.

I got my salad first but held off eating it until the rest of my food arrived. The chicken parmesan looked great. I liked the one, moderately thick slice of chicken and the way it was presented; smothered in sauce and melted mozzarella cheese. 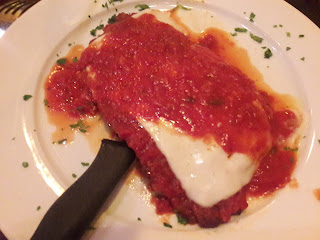 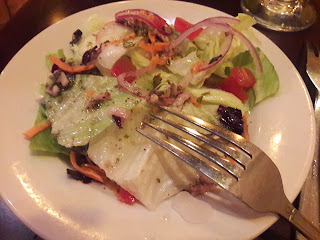 My first few bites were tasty but not overwhelmingly so. Something was off but it is not something I can easily point out. It was just simple. After a few bites I began thinking back to the best version of this dish I have ever had. That most definitely was at Frankie & Johnny’s Pine Restaurant (http://bit.ly/2xJPMud) upon my second visit there. It was a gigantic and especially delicious to say the least.

Even though I ordered my dinner a la carte I did try their Italian cheesecake. It is one of my favorite kinds of dessert and just about every restaurant I have tried it at makes it differently. My very favorite version is homemade with my grandmother's recipe but I am always open to trying it someplace new. 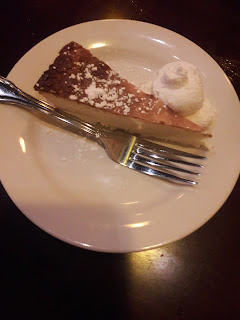 Anthony’s cheesecake was much sweeter than I expected or cared for it to be. It was a small piece served with a side of whipped cream, another no-no in my book. Don't get me wrong I ate it all, same goes with my dinner, but I left unsatisfied.

I’m beginning to realize that I have had and cook so many extraordinary meals that when one is average it causes disappointed. I would say the food here is good but not out of your way, got to get here, kind of experience.

I am told that Anthony’s pasta and pizza are the most popular menu items ordered. I will say they had a large selection of both and I did have my eye on the stuffed penne alla vodka. Perhaps there is a recurring visit in my future. If so, I am going with carbs on carbs on carbs. They have never let me down yet.