For That Mother F**Ker With the Hat 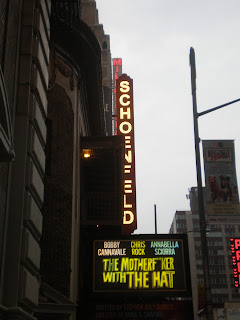 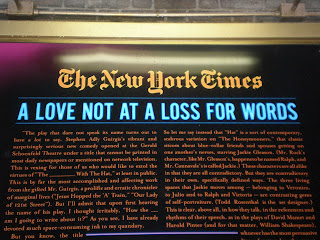 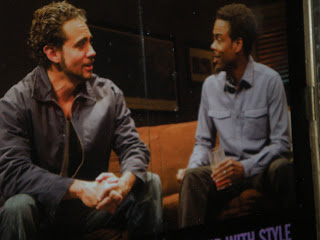 I originally fought the idea of seeing this show many times. I couldn't understand what it was about, besides that Chris Rock was in it. What finally convinced me to go was learning that Bobby Cannavale’s character, not Chris Rock’s, was the lead and hearing from numerous friends that he was amazing. I was also moved by the fact that the play was closing sooner than originally planned. The play was originally scheduled to close in September but now the final show will be performed on Sunday July 17. So I looked up my coupon (and one for parking too) and I bought my ticket.
What can I say about a play whose name you can't fully say out loud in mixed company? Well for starters, I am going to say that it is full of laughs, surprises, serious drama, and a cast of incredibly talented actors. It is also full of swearing. Which a potty mouth like me loves. It takes no more than a glance at the title of this blog to figure that out.
I loved that the total performance time was 90 minutes with no intermission. No need to stretch out a show. Most intermissions only exist so the audience can attempt a bathroom run and then take too long getting back to their seats, thus holding up the show. Of course for some shows intermission is necessary for: set changes, actors, and most of all building the suspense. Good examples can be seen in Equus, Gypsy, Promises Promises, Rent, Million Dollar Quartet, and That Championship Season, just to name a few. Intermissions in my opinion work best with dramatic scenes that have an unveiling in the next act.
Review
But of course what I loved most about this show was the set design and of course acting. Since I have a lot to say on this topic I have broken my review into categories so no one gets lost trying to follow along.
Set
Let’s begin first with the set. I wanted to live there!! You should know this set is made to look like at least 3 different apartments going back and forth. The way they simply rotate out a room or flip a bed to create a brand new apartment for each character was flawless. There were so many minor details I adored. For instance, this was the first time I saw a play that had working enormous plasma screen TV. The cups that were used, the frames on the wall, even the food that was there, were all small pieces creating a marvelous world for us to enter. Without a proper backdrop these characters would be running around aimlessly and it would have been hard to care about their lives if you didn’t feel like you are a fly on the wall.
Play/Actors 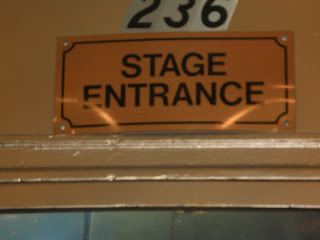 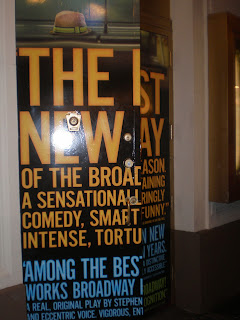 "Just because I'm a nice guy doesn’t mean I won’t kill you.” This is one of the opening lines of this play, spoken by Bobby Cannavale’s character Jackie. Right there I was hooked. The first hour flew by as I was astonished by Bobby’s talent and multi-layered character. He never once let you forget the importance of his role or incredible stage presence. He is what keeps your attention, scene after scene. You are watching the story as he lives it. With a lesser actor this would have been torture.  He was funny, vulnerable, strong, loving, and even violent. His range went to “infinity and beyond”, to quote Buzz Lightyear. I was just overwhelmed by this performance and even if he was alone on stage I could have watched him forever. Side note: Bobby is just as hot in person despite the bumps and bruises he bares from this performance. Another reason I could have watched him forever. 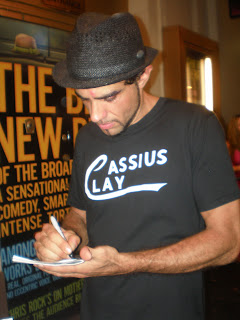 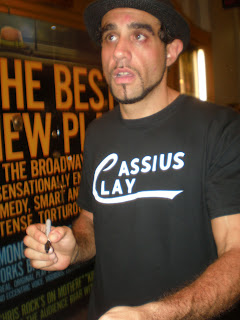 As for the rest of the cast there was: Elizabeth Rodriguez, Annabella Sciorra (who played the mother in the movie that terrifies me still, The Hand That Rocks The Cradle), Yul Vazquez, and of course Chris Rock.
These were all brilliant actors. I don’t know how Elizabeth still has a voice as her character does a lot of shouting. Actually when I met her afterwards (you know I always stalk out the stage door for signatures) she was whispering. Annabella has a smaller role but also played to perfection. She was less than charming after the show but I let it go because I was happy to have gotten to see her. I hope she knows how lucky she is not to be on my black list with Nathan Lane because of that! But that story is for another time. 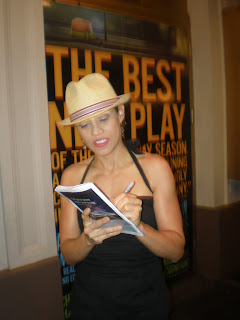 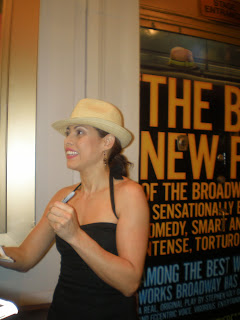 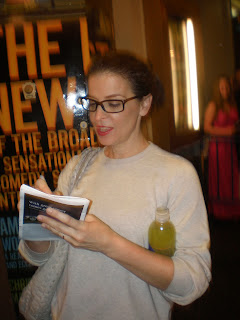 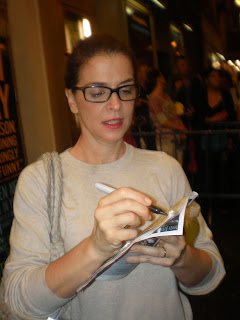 Yul Vazquez as Cousin Julio is a riot and adds some much needed compassion and stability to this story. He was sweet and quick to come out, sign, and move out of the way for the other stars coming out. 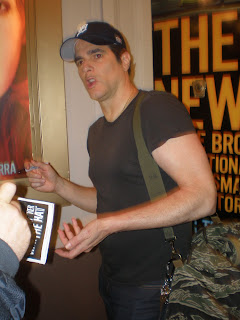 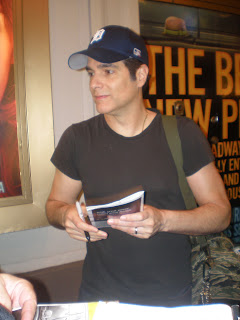 Finally, on to Chris Rock. Chris Rock was actually very good. He was funny and dramatic. Basically Chris Rock was playing Chris Rock. Or rather playing a Chris Rock that had taking some acting classes (just my hunch). But his charm and humor were well played against Bobby Cannavale’s intense character. As for after the show, Chris was incredibly generous with fans, posing for pictures, and signing until security actually threw him into his car. 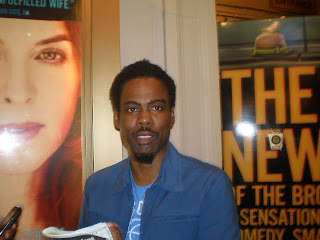 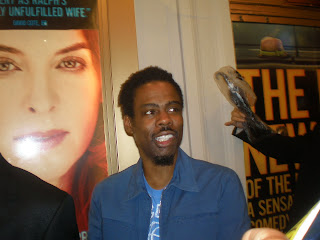 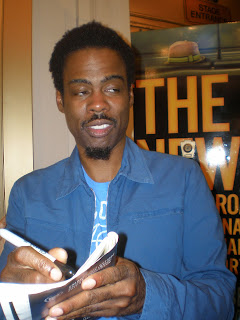 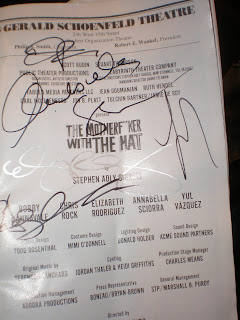 Conclusion
While I enjoyed this show, I do have one minor critique. Even though it was only 90 minutes, towards the end I could have done without the last 20 minutes. I felt like we were circling the closing and a point that just couldn’t be made. It was like the play was directed to hit 90 minutes exactly and anything less would not do. When you start to get antsy that is never a good sign. But I will say that I loved the ending, and will not reveal it in case anyone does go to see it. I loved that it was something different on Broadway. It was a rare combination of talents, genres, and emotions. It was certainly an entertaining show.
“Acceptance is the answer of all of your problems today" as Chris Rock’s Ralph says to Jackie in the beginning. That is one smart Mother F**ker With the Hat.
To get tickets to one of the final performances, act now!
http://www.broadwaybox.com/shows/motherfker_with_the_hat_nyc_tickets.aspx
To read more about this play:
http://www.playbill.com/events/event_detail/21326-Motherfker-With-the-Hat-The-at-Gerald-Schoenfeld-Theatre
Great article on my new love interest Bobby Cannavale:
http://www.nytimes.com/2011/05/29/theater/theaterspecial/bobby-cannavale-puts-his-all-into-a-hard-hitting-role.html?pagewanted=1&ref=theaterspecial
Bonus
While waiting for the actors to come out, I was apparently playing the game I Spy- with myself. I noticed a familiar face going backstage through the stage door, and it was Mario Cantone! Mario is a famous comedian and actor. When I shouted his name he smiled but sadly I didn’t get a photo of him. Believe me it was hard to sleep that night. 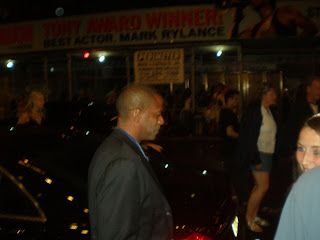 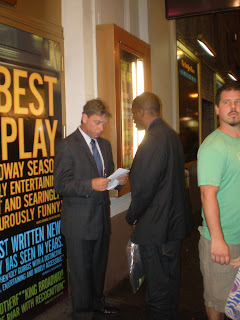 However, just after Mario walked in, another recognizable face walked by. Without thinking I yelled out: Jesse!!! He turned around alright totally surprised by my yelling but I got his photo!!! Jesse is a character on the soap opera All My Children. I had to break my own rule about never yelling out a character name, because I didn’t know his real name at the time. His name is Darnell Williams and his “Jesse” and Debbi Morgan’s “Angie” are legends of this soap. I know this because after I brought attention to him, he was followed by eager fans on both sides of the street which he clearly did not anticipate or know how to handle. Sorry Darnell, but admit that made your night more interesting?