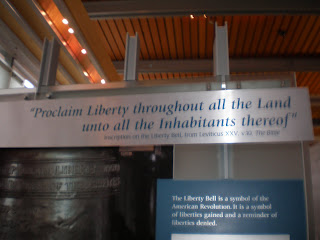 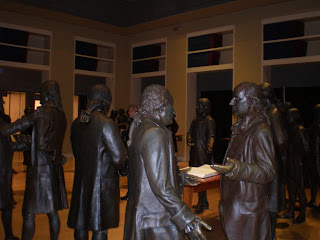 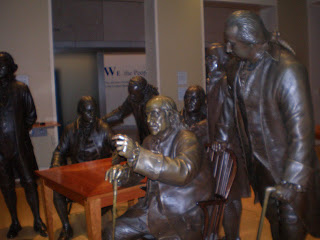 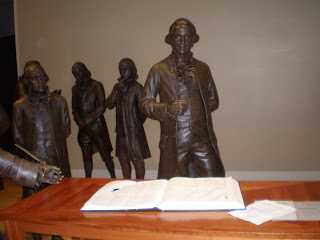 I have a thing for our founding fathers. I know they may have had their downfalls, but I am in awe of their talent, brilliance, and ability to create a nation from scratch.  This is part of the reason I stalk presidential gravesites. I want to be close to them. I feel like those years took place in another world and I wish I was apart of it. This is why I LOVE places, like Philadelphia and Washington D.C. I love tracking all historical moments; the older, the better. If I ever have a son, the odds of him being called Benji Franklin or Thomas Jefferson are pretty high.
My favorite story about the 4th of July took place on the semicentennial of the signing of the Declaration of Independence (for those who don’t know that is the 50th year mark). July 4, 1826 is also the day both John Adams and Thomas Jefferson died. Both men were at their homes, the former in his home in Massachusetts, the latter in Virginia.  Though these men loved each other, they had an adversary relationship. Adams always claimed he would out live Jefferson. That day there was a miscommunication (as you can imagine men riding horseback exchanging messages can make) and Adams believed Thomas Jefferson was still alive, but on his deathbed. Adams last words were “Jefferson Lives!” However, Thomas Jefferson had died several hours earlier. I love the poetry that both of these founding fathers passed away on the same day, and had lived long enough to see the fruits of their labor.
Thus, the 4th of July is naturally one of my favorite holidays. The year 1776 will always be ingrained in my brain. I think this anniversary, like most other holidays, becomes another excuse to shop for sales and get off from work. But the real reason behind this holiday is cause for celebration. Freedom is something we take for granted, despite our current struggles. But fighting in the revolutionary war was another story. Picture fighting without gear, through treacherous weather, against any enemy so powerful victory didn’t even seem like an option. Yet these brave soldiers continued to fight. This is one of the most beautiful characteristics of America.
So I hope you had some fun today watching fireworks, having a BBQ, or just relaxing. I even hope you managed to have a drink or two to toast our nation’s birth. After all, it was Benjamin Franklin who famously said: “Beer is proof that God loves us and wants us to be happy.”
Happy 4th of July!!!
P.S. If you are interested in a great read on the Revolutionary War, I suggest David McCullough’s book 1776:
http://www.amazon.com/1776-David-McCullough/dp/0743226720/ref=sr_1_2?s=books&ie=UTF8&qid=1309829403&sr=1-2
P.P.S. President James Monroe died on July 4, 1831 but he wasn’t trying to outlive anyone so it’s less exciting.