Now we are up to the best part of Memphis: the food. I can’t believe how good something can be.  It’s better than you read about and better than it looks on TV. It’s actually almost indescribable but I will do my best.
As with most of my vacations that include of a lot of sightseeing there isn’t a lot of time to eat. But the meals I schedule are the ones that count. I pick the places I have heard about and have been waiting to try. These are the four from Memphis. If you don’t like getting your hands dirty these are not the places for you.
Neely’s BBQ 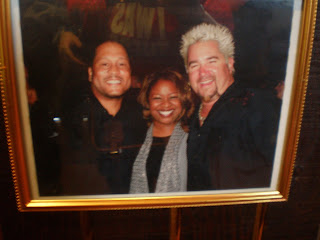 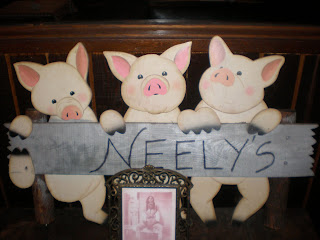 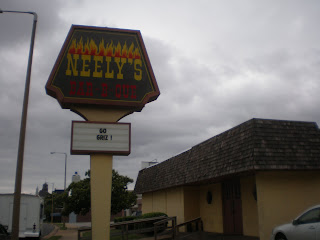 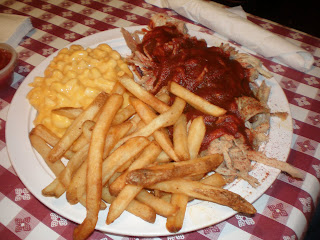 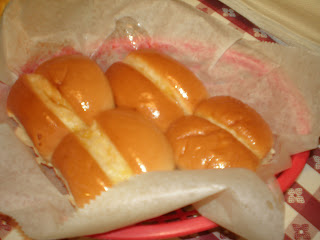 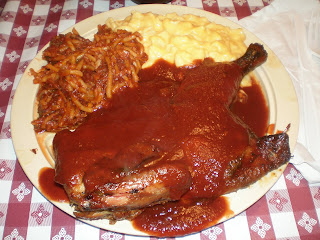 Oh how I love Pat and Gina Neeley! I love the way they talk to each other. It cracks me up. Coming from another couple it might be sickening but they are too cute for words. They are on the Best Thing I Ever Ate often and that is where I discovered them. I love when they describe their favorite restaurants, it always goes something like this: “My baby loves her ribs..........that’s right baby I do.” Between their delivery and recommendations it’s a win-win situation.
Prior to hosting their own show on the Food Network, they owned and operated a family business in Memphis. There is actually two locations. So I knew when I went to Memphis I was going to their restaurant. I was praying they were there but sadly they were not.
The restaurant is a local favorite serving everything barbecued from chicken to spaghetti and bologna. I ordered the chicken but the pulled pork was much better. It had a lot less sauce than the chicken and wasn’t as messy or heavy. I ordered wrong. However I did try their Mac and cheese and barbecued spaghetti. The Mac and cheese was delicious and the spaghetti was ok. It actually tasted exactly how it sounds. Overall, it was good experience but sad to say it wasn’t the highlight of the Memphis restaurant seen. But I still adore those Neely’s!
To get better acquainted with the Neely’s: http://www.foodnetwork.com/down-home-with-the-neelys/index.html
http://www.neelysbbq.com/ourmenu.htm
Beignet Cafe 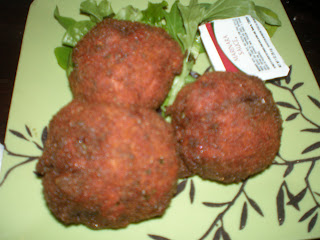 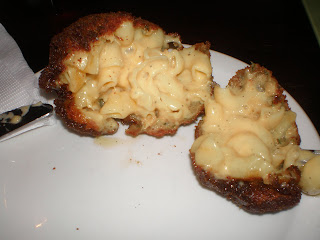 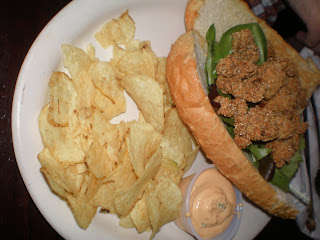 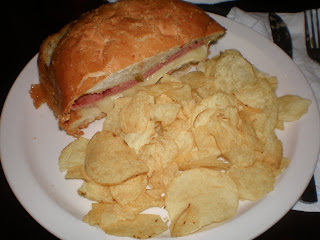 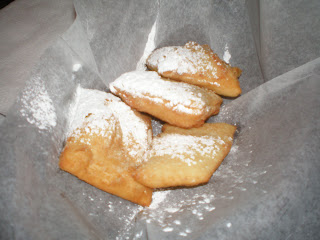 Walking through these doors is like hopping a flight to New Orleans. The look, feel and food are taken straight off Jackson Square. There are po’boy sandwiches, fried Mac and cheese balls, muffalettas, jambalaya, gator sandwiches, and even beignets on the menu. If you don’t know what any of these are you need to book your flight to New Orleans this instant. I will have more on that town that I love in another blog.
Anyways, I went here because Arthur Frommer told me (yes I assume he writes every book and is speaking directly to me) that these beignets were as good as the legendary Café Du Mondes of New Orleans. Café Du Monde is the happiest place on earth. So when I read this naturally I fitted it into my itinerary. Arthur Frommer is a liar or getting senile. While the food was great and I enjoyed this place immensely (actually so well done it made me ache for New Orleans) the beignets are nothing like Café Du Mondes. They were decent, better than most who claim to sell the best, but nothing beats the real thing. If for no other reason come here for the fried Mac and cheese balls. Turns out anything fried tastes like the hand of God blessed it.
For more information: http://beignetcafe-memphis.com/
Gus’s World Famous Fried Chicken 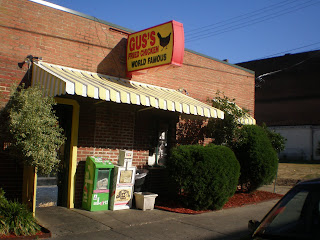 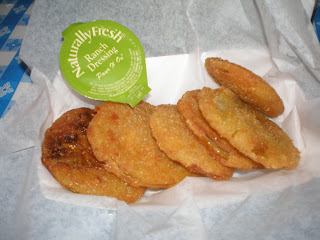 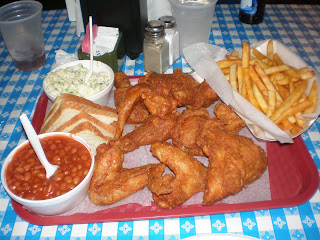 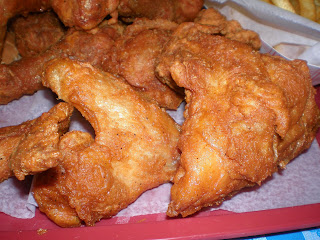 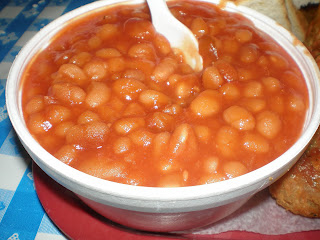 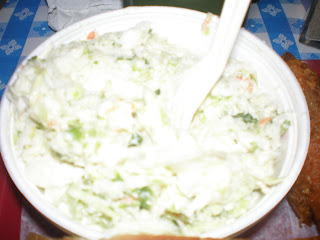 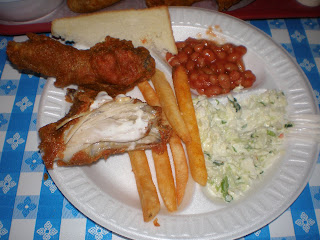 There is a saying at Gus’s: “If you haven't been to Gus's, you haven't had fried chicken.” This is even on a t-shirt that they sell, that I was talked out of buying. I told you when I am having a good time I like to purchase souvenirs. The real reason I was going to buy this tee is because it is a genius line that is perhaps the only accurate way to describe going to Gus’s and having this fried chicken. But I settled for writing it down.
If you have had fried chicken before and you have a favorite place, that food will taste like Kentucky Fried Chicken next to Gus’s. I got a lot of flak for this but I am right. If you haven’t had Gus’s you don’t get a vote. My former favorite was Blue Smoke in NYC and now I am pretty sure I can never go there again. I am ruined for any other chicken. I only have eyes and taste buds for this chicken. I had a religious experience with this fried chicken. You get the idea.
Gus’s looks like an Amish one room school house from the outside. It is plain and unassuming. But it’s the smell of heavenly fried chicken that you notice before you even get out of the car. Then come the hoards of people trying to get in. I was lucky I didn’t have to wait but knowing what I know now I would have stood there waiting for a table for 24 hours if need be.
We started with the fried green tomatoes. I have always wanted to try them. I hear they are the best in Savannah, Georgia but these were very good. Gus's only serves fried chicken, no other meats, just sides. I love how everywhere we went they put white bread underneath the meat. I mocked it at first but it definitely helps absorb the spice. The chicken here is not at all greasy. The batter has a little kick to it but I wouldn’t say that it is hot. It comes with beans and slaw. The beans were good and the coleslaw was refreshing! It was the best I have ever had. It wasn’t the typical deli kind. But back to the chicken, the skin was light and crispy. The batter wasn’t too thick. It was just right. It’s the place I would likely choose for my last dinner on Earth.
Good news, they ship: http://www.gussofms.com/
The Rendezvous 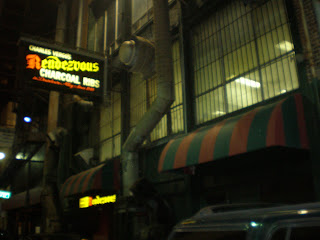 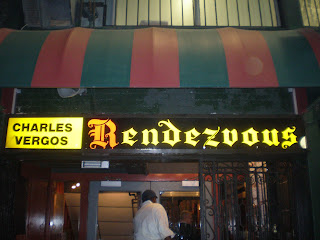 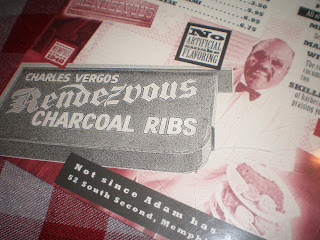 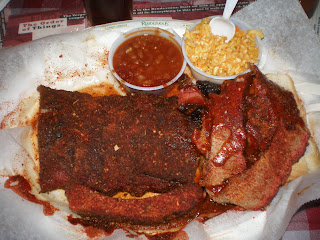 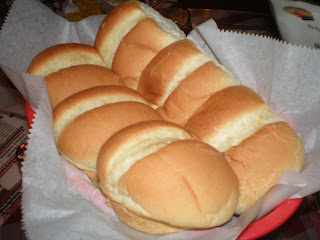 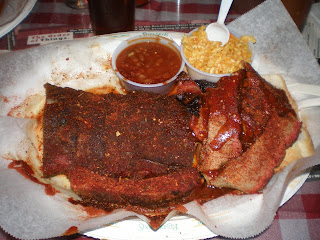 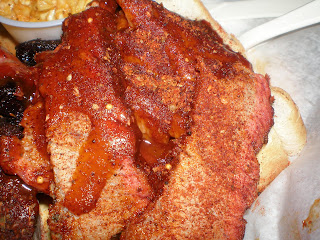 I went here for dinner my last night it Memphis. Talk about going out with a bang. This restaurant started by accident in 1948 when the owner found a barbecue pit in the basement. Charlie Vergo’s Rendezvous was born. Since Mr. Vergo was a Greek immigrant he cooked barbecue the only way he knew how, with a special blend of Mediterranean spices used as a dry rub after the meat was smoked. This is a huge difference from the barbecue food most people are use to that has a ton of sauce smothering the food. The ribs are the highlight of the menu but I had seen this restaurant on various Food Network programs and the brisket always looked so delicious. I couldn’t resist so I got the combo platter. Sometimes I am surprised by my own good judgment. It was incredible!! I am not normally a rib or brisket eating woman by any means, but this meat was like nothing I ever had before. The ribs were tender with the meat falling right off the bone and no fat. The brisket had a beautiful char on the outside with a moist delectable center. The brisket was thinly sliced. The seasoning is so unique. It’s a blend of sweet and spice. Once again there were beans and slaw on the side. But this time I thought the beans were too sugary and the slaw was a letdown after having Gus’s the night before. But, you really don’t need the sides. You are there for the meat. And meat this good doesn’t need a side, except of course white bread.
If you are in town you must come here. It is located in an odd spot, in an alley. At night it sort of looks like you might get murdered but you hear the crowd inside, and outside if there is a wait, and you realize that it’s worth the risk.
According to Rendezvous, “Not since Adam have ribs been this famous,” and for good reason.
They ship too: http://www.hogsfly.com/
Stay tuned tomorrow:  For Rock n’ Roll, Ribs, and Reflection Part IV!