For Find Out Friday - What Did Typhoid Mary Die Of? 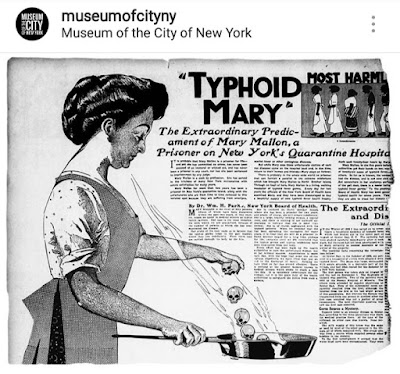 I actually sort of know the answer to this question.

I know that she did not die from typhoid as her name would suggest.

She actually died at the age of sixty-nine from a pneumonia on November 11, 1938.

The story of Mary Mallon is a sad one.

She was born in Ireland in 1869 and emigrated to the United States in 1883. As was common in those days, Mary found work as a domestic. She became a cook and in 1906 was working in Oyster Bay in Long Island in the summer home of Charles Henry Warren - a wealthy financier.

Within a week of her employment six of the eleven people in the household fell ill with typhoid.

Typhoid is a bacterial infection that leads to high fevers, diarrhea, vomiting, coughing, abdominal pain, and fatigue. It is largely associated with poor and overcrowded areas where there is a limited availability of clean water. It can very quickly become fatal.

With the much of the Warren household sick, a man named George Soper was hired to investigate. Soper was a sanity engineer and his investigation was the first to realize that an asymptomatic carrier could still infect others. He concluded that  Mary Mallon was the culprit, although by that time she was working for another family in NYC. It was found that seven out of the eight households she worked for had been infected with typhoid, likely from Mary and a lack of hand washing while preparing food.

Aside from “Typhoid Mary” Ms. Mallon had another nickname: “the kidnapped woman”.

After George Soper’s investigation was over he contacted the New York City Health Department and Mary Mallon was arrested in March of 1907. She was forced to live on North Brother Island, an inlet of the coast of the Bronx. Her only companion was a fox terrier.

Mary was never fined or officially charged with a crime. In 1909 she sued the health department to be freed. The New York Supreme Court would not hear the case.

In 1910 a new commissioner came on board and freed Mary in 1910 on the condition that she could no longer work as a cook.

But Mary did not listen.

Using the alas “Mary Brown” she was discovered to be working in the kitchen of Sloane Maternity Hospital in NYC when another typhoid outbreak occurred there in 1915. Twenty-five people were infected and two died.

Shortly thereafter, Mary was back in custody and back living on North Brother Island. She would remain there until her death spending a total of twenty-six years in confinement, including the last twenty-three years of her life. While on the island she worked on preparing laboratory medical tests and is said to have found comfort in her religion. She was cremated and buried in St. Raymond’s Cemetery in the Bronx.

In total, it is thought that Mary infected some fifty odd people, resulting in a handful of deaths.

Though far less common in developed countries, typhoid has not been fully eradicated. There are two vaccines now available and medications to treat if you have been infected. It is no longer a death sentence.

Without a clear understanding of how she, a well person with no symptoms of disease, was transmitting typhoid to countless others, it is likely she was the victim of her circumstances. The fact that she was a single, working woman and an immigrant didn’t appear to help her cause.

I have read that at the time she was urged to have her gallbladder removed as a way to prevent her from being able to further transmit this disease. I have no idea if that would have been helped but can you imagine what that must of sounded liked to Mary? A dangerous operation at that time, for a disease you did not actually have yourself. No wonder she declined.

As a result she became the ultimate victim of fear and the disease she is blamed for spreading.

Although this story is almost one hundred years old it echos so much of what the world is currently experiencing while dealing with the Coronavirus pandemic.

As we are urged to stay at home, avoid loved ones, and wear a mask, how many will ignore these precautions further causing countless people to get sick and even die?

The shocking headline from this past Sunday’s New York Times that displayed the names of the one hundred thousand lives lost in the U.S. clearly drove that point home.

It is these circumstances that have me thinking a lot about Mary Mallon.

I wonder what her life was really like. How did she endure knowing that she was responsible for the illness of so many? How did she live the remainder of her life quarantined from any real contact with the outside world?

Of course we will never truly know what she was thinking and feeling, but after a few months of separation from my own family and friends, I can’t help but feel sorry for her.

Mary beared no responsibility for the genetic predisposition she was inflicted with but nonetheless had to pay the price for it. Surely, it was a matter of public health but also a matter of a personal sacrifice. She was made an example of even though over the course of many years, there were apparently over four hundred healthy carriers of typhoid, though no one else was made to live in a permanent state of quarantine.

When I think of Mary’s life, wearing a mask when interacting with others doesn’t seem to be such a big deal. Ironically the hashtag #TyphoidMary has been circulating online when discussing those who are putting others at risk.

BBC America was working on creating a mini-series called “Fever” staring our own Zoey Bartlet (for all you West Wing fans) aka Elizabeth Moss as Mary Mallon. I am currently trying to find out if it ever came to fruition so I can watch it.

In order to honor Mary and the legacy (good or bad) that she left behind, I think the first step is to reverse the tarnishing of her name. Therefore, I suggest we should stop calling her out of it.