For Find Out Friday - What Did Nellie Do to Make Her Parents So Worried? 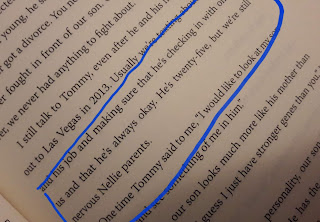 I am in the midst of reading Erika Jayne’s memoir “Pretty Mess” and I came upon a phrase I hear time and time again; “Nervous Nellie”. Erika was using it to express her feelings as a mom of an adult son and it made me wonder if Nellie’s parents were as worried as she was, why?

The expression Nervous Nellie describes someone who is hopelessly nervous without just cause, no matter the subject, be that a person or place.

The earliest reference to this phrase appears in 1926 as a means to describe a worrisome person. But the term is derived from is much older.

Older, worn out horses were called “Old Neil”. A horse that became high strung was dubbed a “Nervous Nellie”. The first public use of that phrase to describe a person was in 1926 when Senator Frank Kellog was described as such for being the sole Republican Senator to be in favor of the U.S. signing the Treaty of Versailles, which ultimately ended World War I.

Following suit, President Johnson enjoyed calling those who spoke out against his policy in Vietnam, "Nervous Nellies”. From there the rest you can say is history.

Once this simple explanation was found, I began thinking about another infamous Nellie, one that had her name on an amusement park during my childhood, one Ms. Nellie Bly.

Nellie Bly was born, Elizabeth Cochrane in Cochrane’s Mills, PA. Needless-to-say this was a town founded by her father, Judge Cochrane. Her great passion in life was writing and during her youth she began writing for a local newspaper for five dollars a week to help meet her family’s needs. She would eventually earn over more than twenty-five thousand dollars a year as a writer as an adult. The former Ms. Cochrane took her pen name from a character in a Stephen Foster novel that was popular in the late 1880s.

But Bly’s most brazen move was when in 1887 she stormed into the New York World office and took the only job offered to her: agreeing to have herself committed to a mental insinuation on Blackwell’s Island (now called Roosevelt’s Island) and to write about the atrocities she witnessed. And I thought Martha Stewart was brave for going to jail without appealing her conviction.

The story she would tell upon her release, “Ten Days in a Mad House”, would change the world of those suffering patients in mental asylums long before Geraldo Rivera would break the news that a lot of terrible things were still going a hundred years later in places like Willowbrook State School. She was a pioneer of investigative journalism.

As if that weren’t a breakthrough enough, during her work as a journalist she also took up a diving expedition when that process was in its infancy, took a hot air balloon ride, and the second most important journey in her life: traveling around the world in seventy-two days. This feat removed all of the gravity from the record Jules Verne’s fictional character had broken in the infamous book “Around the World in Eighty Days”. Bly would hold her record for several months and was a woman nonetheless! I am picturing how pissed Bobby Riggs was when Billie Jean King beat his ass times like infinity.

Naturally Bly’s book was called “Around the World in Seventy-Two Days”.

Despite all of her success as a writer, Nellie Bly would retire from that profession at the age of thirty having married millionaire Robert Seamen in 1895. When her husband died, he left her in control of his enormous manufacturing company. As a business owner she was the creator of several innovations, such as the fifty-five thousand steel gallon oil drum, still in use today.

Later on in life, Bly had a brief return to her first love and reported on World War I and issues of the day.

The amusement park that my brother and I grew up riding on rides and playing arcade games at, bared her name until new owners took over in 2005. It was renamed Adventurer’s Park and was given a much needed renovation.

Nellie Bly Amusement Park had opened in 1966 and the park’s name was a nod to that lady’s adventurous spirit. It wasn’t until I was an adult I learned she was a writer.

The park remains open March through October and admission is still free - you pay per ride. So this summer if you are near the Sheepshead Bay area of Brooklyn maybe pass by. I, myself, haven’t been back since I was a child and was terrified going down that massive yellow slide (that they still have) in a potato sack with my father. The only thing more frightening was riding on the original, and very much wooden, Cyclone rollercoaster in Coney Island. The fear on riding on anything wooden also prevents me from taking any escalators at Macy’s in Herald Square.

Sadly this lively woman died early at age fifty-seven from pneumonia in St. Mark’s Hospital in NYC. Though she many not have had nearly enough years in this world she surely made her’s count. Nellie Bly was in fact no Nervous Nellie herself.