For a Vinny That Is Not My Cousin: “Vinny’s of Carroll Gardens” 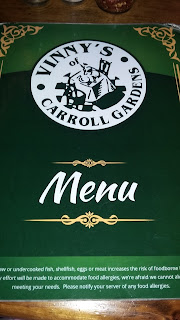 This blog is going to come as a surprise to many people. I had to talk myself into it but I went with my instinct. My instinct is always right. So when something I previously didn’t enjoy becomes a new delightful experience I have to spread the word. It is my job after all.

Vinny’s is a small restaurant in the Carroll Gardens section of Brooklyn. Carroll Gardens is a very popular neighborhood nowadays. It is filled with many places to eat, drink, and be merry. With so many places to choose from it helps to have a recommendation you can trust. It is with this in mind I write this blog. 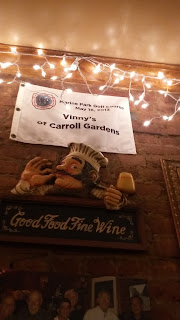 Vinny’s has been a place my family has been going to for around ten years. They swear by it. It is run by, shocker- Vinny- who is always working hard cooking or taking care of customers. There are maybe ten tables at most including a few booths. Reservations are not taken so you may have to wait for a while to get in especially during the weekend. But seeing a line outside of a restaurant is usually a good sign and the day of my most recent visit that was certainly the case. 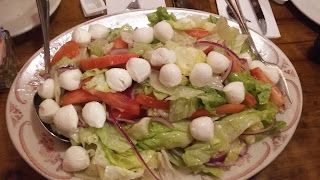 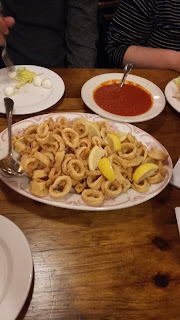 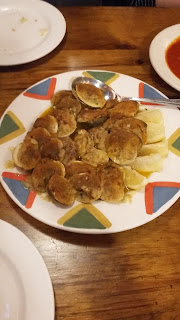 For as long as my family has loved going to Vinny’s and taking anyone they know with them, I have not been a satisfied customer. I never really got what the big deal was. As an Italian who eats a lot of Italian meals both at home and in restaurants, I was not impressed. I know the portions are huge and it is not expensive and I can see the draw in that. But for me the sauces that are available on their selection of many types of pasta never did anything for me. After a few bites I would be over it. I could get away with the grilled chicken and some salad in a pinch. I would rather spend my time and money elsewhere. 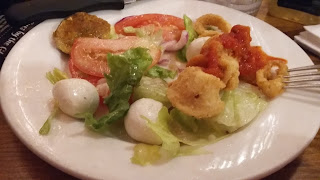 After several years of avoiding Vinny’s, both at the restaurant as well as with takeout, the time had finally come to give him another try. It was my brother’s birthday and that is where we were having his dinner party. So I was off to retrace my path with an open mind. 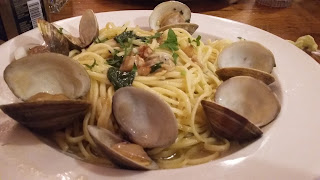 It was a Saturday night so the place was hopping. We had a party of eight and had to wait for at least thirty to forty minutes for a table but as usual good things come to those who wait. 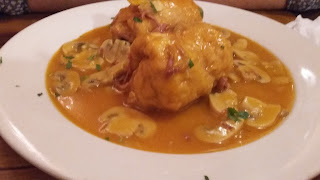 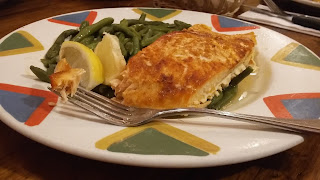 We were seated at a table in half way through the restaurant but towards the right side so we weren’t in the way of others or having people shove past us on their way in and out. I really hate seats like that. It ruins my mood. Another thing that can ruin my pre-meal mood is a snotty waitress, but again that was not the case. Everything and everyone was delightful.

As we peered at the menus, drinks and appetizers were ordered. The table would be sharing a garden salad with fresh mozzarella (maybe the best thing in this world since sliced bread), calamari with marinara sauce, and baked claims. These are three of my favorite starters but there is a high risk of unpleasantness no matter where you are eating. There is nothing worse than a piece of calamari that isn’t crispy but instead is very chewy. I have seen this go awry quickly. Baked claims that aren’t properly mixed or seasoned are incredibly disappointing. I am happy to report that I was pleasantly surprised by how delicious the food was. Like so surprised I couldn’t find a thing to complain about. It was confusing while at the same time enjoyable. To boot my family and friends were having amazing conversations catching up and many, many laughs. 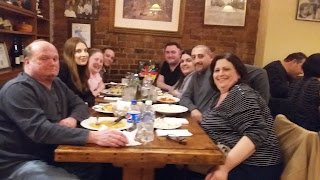 Before we knew it our entrees had arrived. I choose the linguini with white clam sauce. The pasta was pilled up taller than the dish it was served in. The claims looked fake, as they appeared perfectly placed around the outer rim of the plate. It was almost too pretty to eat. I dug in and took several bites. It was definitely the right thing for me to order. I liked the flavor and consistency. However I think it was slightly more oily than I would have preferred. But that wasn’t a problem at that moment. I was way too full to even eat half of my dinner. It would be coming home with me. 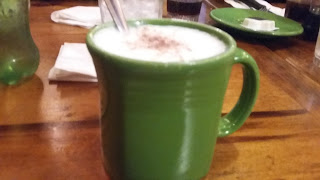 This meal ended with a nice cup of cappuccino and even more fascinating conversation. We sang happy birthday, took some photos, and said goodbye. Our evening had come to an end.

As you can tell from the title of this blog I have many cousins named Vinny and I would tell everyone of them to give this Vinny a chance. I am glad I did and maybe in another few months I will give it a go yet again. You never know what flavorful, fun, foodie experiences lay in wait.