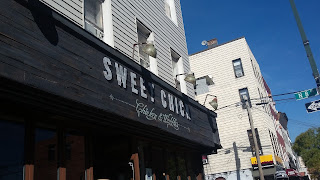 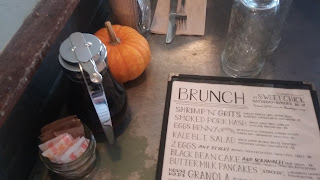 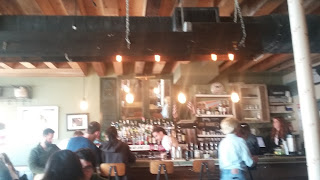 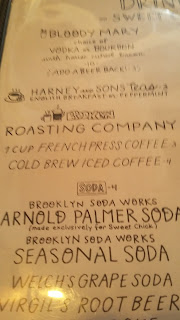 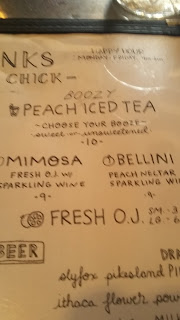 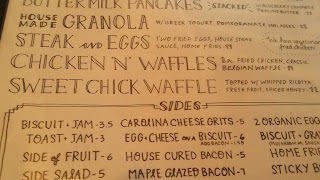 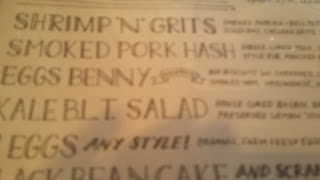 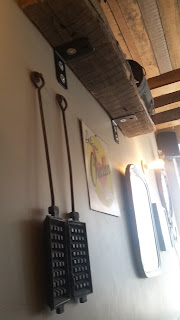 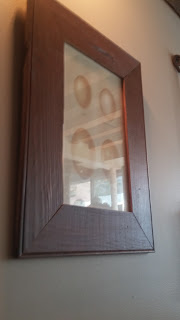 I scarcely know where to begin. When I think about my first visit to Sweet Chick for Sunday brunch so MANY things are flowing through my mind, all of them happier than the next. In fact I love it so much I am still adding things to the list. It is like love at first sight, you can’t fully believe how wonderful it is until it happens to you. Trust me friends, this experience should happen to you over and over again. I am already planning what to eat on my next visit.

Sweet Chick has two locations, one in Brooklyn and one in Manhattan. I went to the one in Brooklyn for my cousin’s birthday. None of the four of us in attendance had been there before. My cousin learned about it from a TV show and had brought it to my attention. Now we were finally going.

As soon as I walked in the energy was palpable. I knew within thirty seconds this was a place was meant for me.

The music was pumping playing songs I haven’t heard in years but ones I loved listening to, like old school Britney Spears and the Spice Girls. The lights were low but there was a ton of sunlight coming in through the front windows. The staff was UNBELIEVABLE!!! More than friendly, they looked like they were actually having fun. The atmosphere was intoxicating.

While this restaurant was packed we got a table right away. The tables are close together and it created a united community. It was all laughter and conversations. It felt like I had been transported to a different place and time. I was having fun without doing anything besides walking in.

After we were seated our waiter came over. He was divine, Mr. Personality for sure. His name was Screech, enough said.

When I looked at the menu at home I had picked the fried chicken and waffles. There were other dishes that sounded good but I was going to go with my first choice. What you cannot tell from a website is if the menu is list a list of words or will those dishes sing when you are there. Sometimes you just have to wing it. Being there everything looked delectable and smelled even better. I am pretty sure there isn’t anything you could order there that wouldn’t be amazing. The water even tasted better.

I was going with the fried chicken and waffles and Screech suggested we got biscuits with the homemade mushroom gravy. I took one of those as well. I also decided on a coffee and a peach Bellini. This was a birthday brunch after all.

This is what I was presented with just a few minutes later. 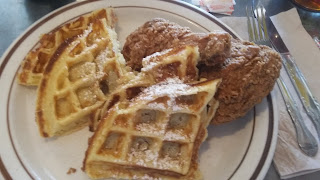 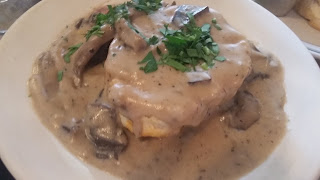 How good does that look? No really. Take a minute or two. Stare at the beauty of the mushrooms in the gravy and the perfect biscuit underneath it.

Then look at the chicken and the waffle that is definitely the best one I have ever have.

This biscuit by itself was good. It didn’t crumb all over the place and was not too dry. But with the gravy it was a sensation of flavors. That gravy would make anything that much better. I am picturing it on a rice cake to make that a treat I would actually crave. Come to think of it I could eat that mushroom gravy with a spoon like yogurt. Yes it is that good.

The fried chicken had the right about of spicy ingredients. The outside was so crunchy and the inside had the moistest meat. It literally fell off the bone. The waffles played the part of the perfect companion for this fried chicken. It was sweet, fluffy, all the right qualities. The syrup was good but I was almost out of chicken by the time I tasted it. The chicken and the waffles were literally good together without another thing. Although you know that mushroom gravy didn’t hurt. At one point I was dipping a waffle into that gravy, just kept getting better and better.

My fried chicken wasn’t even the best part. Neither was the waffle. It most definitely was that gravy.

The peach Bellini was even the best one I’ve had. It wasn’t too strong or too sweet. It went down nice and easy right before my coffee. This place couldn’t make a mistake if it tried.

I have this tendency to be a messy eater. I do not do it on purpose but my food always comes apart and I need many, many napkins. I want to be clear that there were no crumbs left on me from this meal. While I was knee deep in my chicken and waffles I made sure all of it went in my mouth.

I could not have enjoyed a meal more. I was with the best people, eating the best food, at the best restaurant I’ve been to in a while. I was already planning to come here the weekend of my birthday, which I am happy to say is rapidly approaching.

Of all of all the places I have eaten fried chicken and waffles this is the best one in New York City, second favorite of all time!  The winner in first place is Gus’s in Memphis and I have not found anything close until I had this dish in this restaurant. The first bite gave me such a flash back I had to take a minute to focus. This was like the best of both worlds, my favorite chicken dish in my hometown, pure paradise indeed.

It is funny how when you eat something at one place you think it’s the best and then try it someplace else and that’s the best you had. This can go on and on, I feel this happening more and more. In my search for the best of the best of the foods, I love adding a new place to the top of my list. I found out recently (from owner John Seymour) that fried chicken and waffles was created in New York, not in the Deep South as most of us probably assumed. Sweet Chick just keeps wowing me.

As if all this yumminess wasn’t enough we finished our meal with a birthday cake we brought with us. It was delicious as well. Maybe it’s just the restaurant. Anything you eat there must be magnificent. It must be some kind of rule. I plan on testing that theory again and again.

In terms of fried chicken and waffles there are currently three other restaurants I plan on taste testing. They are: Amy’s and Pies and Thighs in New York City, Roscoe’s in Los Angeles, and Gladys in Atlanta. This last one is home of the famous Gladys Knight, Pips not included. 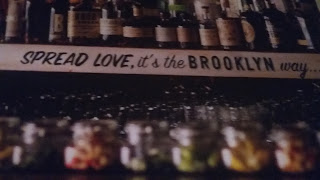 I am going to leave you with one final thought (just like Jerry Springer).

Now check out what owner/chief John Seymour has to say about his establishment:

I know now my experience would make him happy.