For a Day Spent Under the Brooklyn Bridge 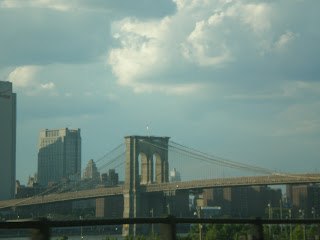 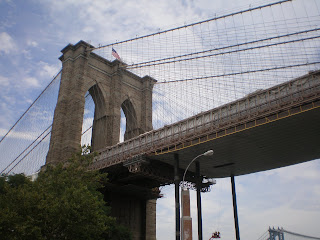 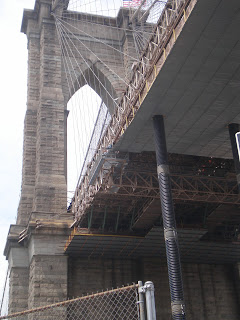 The Brooklyn Bridge is one of the most recognizable sites in the world. It is beautiful and enchanting. It can also be a lot of fun. You can walk over it to Manhattan, take a boat ride underneath it, or use it as a base point to find good food. On the Brooklyn side, there are many nice places to eat, and one recent sunny weekend I tried out Grimaldi's Pizza, Brooklyn Ice Cream Factory, and Jacques Torres Chocolates. Afterward I was very full and very happy.
Here's why...
Grimaldi’s 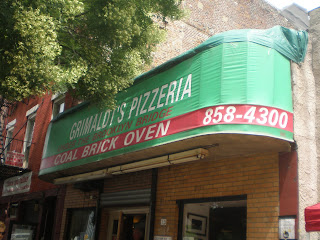 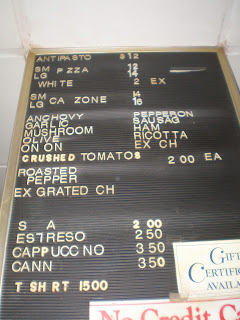 Since I am apparently hunting down every famous pizza place and trying them out, I had to make my way to Grimaldi’s finally. After all of the years I have been reading about it, I could wait no longer. I decided to be there when they opened to avoid as much of a crowd as possible. I would have likely been third in line except that a tour bus beat me there. Everyone on line was waiting to be seated and from where I was standing, thankfully under scaffolding blocking the hot sun, it was about a thirty-minute wait. That is pretty reasonable but I decided to go with a take-out order instead. There was a man standing guard outside, monitoring who came in and out. It was like Fort Knox but with pizza. Only one person at a time could go inside to place their takeout order and then immediately had to return back outside. When it was my turn I ran in and out.
It was a zoo in there packed of people, but I still managed to take these photos. 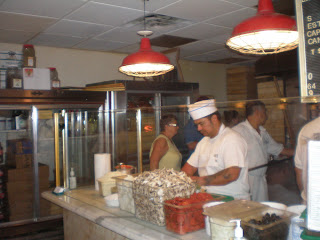 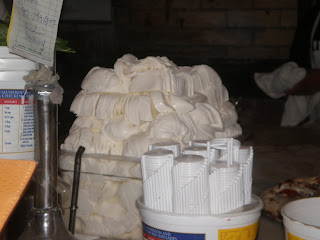 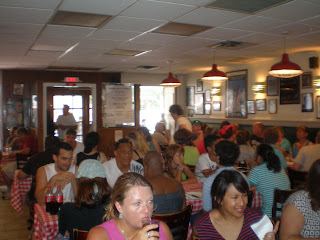 After about a wait of twenty minutes or so I was handed my pizza piping hot out of the oven. I was never really sure what that expression meant until I touched what felt like fire.  Instead of a traditional pizza box, I was handed a round paper bag shaped like a pizza that the scolding hot sauce and oil were now on a race to eat through. I went back to my car and left it there to cool. I went to the next two places on my list before the pizza was at a temperature I could touch. Then I got right down to the business of inhaling it like it was my job. And because you're reading this now, it kind of is, so thanks!!
This is what it looked like before it was demolished. 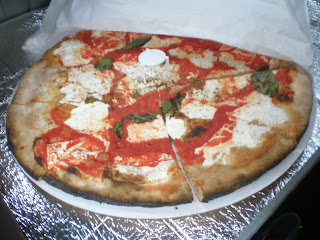 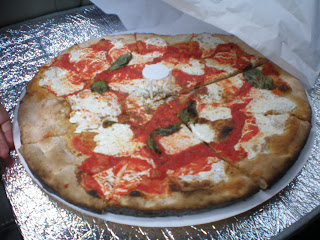 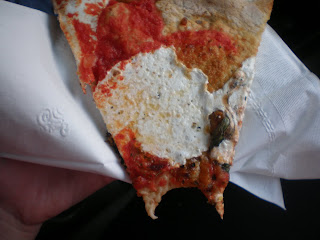 The pizza is thin with a dry crust. Somehow the cheese and tomato sauce stopped short of the whole slice. I thought the flavor was good and better than the quality you find at a corner pizzeria on any street in NYC. But, I have to say it wasn’t that extraordinary. It has become one of those places you hear so much about, but the hype has soared above the product. I enjoyed every bite but it is no match for a place like DiFara’s (http://bit.ly/rtfT2j).
Brooklyn Ice Cream Factory 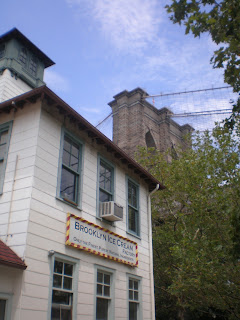 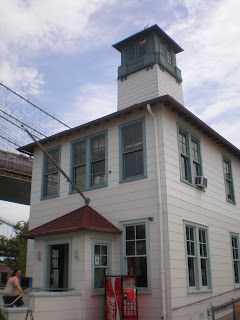 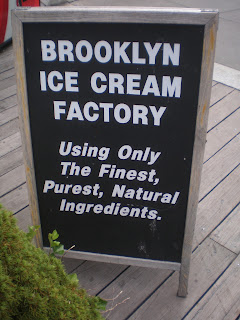 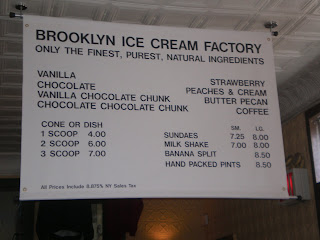 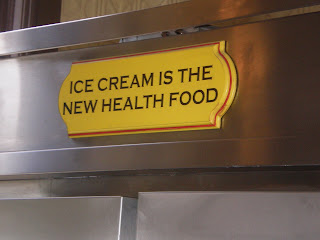 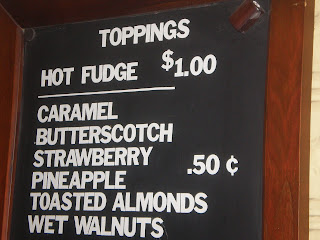 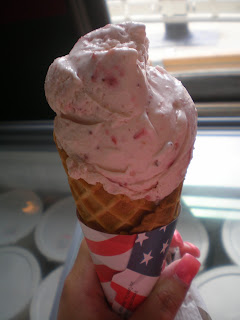 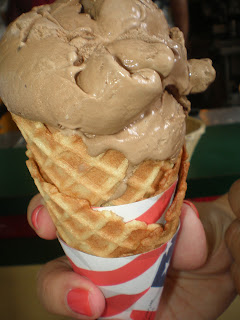 Ah, another gift from our friends at The Best Thing I Ever Ate. Chef Michael Psilakis  mentioned the butter pecan this on their Nutty episode. The way he described this simple yet homemade treat made my mouth water and I knew I had to have some. But it sadly was not meant to be. I was there only an hour after they opened and they were sold out of that flavor!!! The outrage and sadness was overwhelming. All I could think of was I have to have some to cross off my list, to blog about. Between that and the heat it was almost too much. Considering they only sell eight flavors and that was the only one they were out of, says something. Since I am not a quitter, I pulled myself up by my bootstraps and decided to try the Strawberry. Those who tagged along tried the Peaches and Cream and Chocolate. Wow, is this ice cream not to be missed. The richness and purity of the flavors was incredible. I know I eat a lot of really delicious things but this in is the top five of all time on my dessert list for sure . Now the only thing left to do is go back for the Butter Pecan. Afterall, I don’t want to let Mr. Psilakis down.
Jacques Torres Chocolates 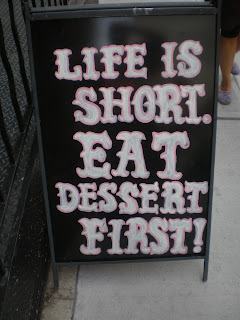 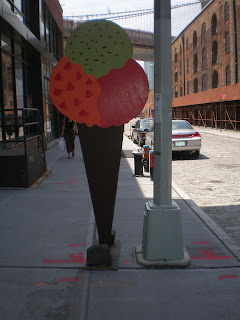 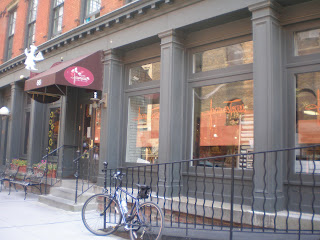 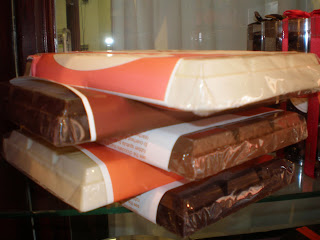 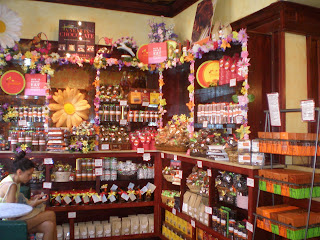 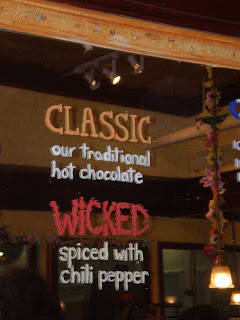 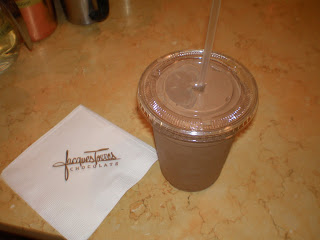 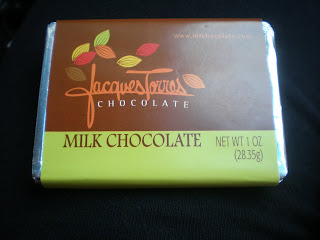 Lastly, it was time for a trip to a real life Willy Wonka factory. Anything you can think of, this shop has it covered in chocolate. Naturally I learned about this place from my two favorite shows: Samantha Brown and The Best Thing I Ever Ate (Ice Creamy). When I started tracking the places I wanted to eat at, this was one of the first to go into my NYC folder.
Did you ever think of dipping Cheerios in chocolate and charging people for it? I sure wish I did. But this isn’t just any chocolate. Jacques Torres is famous for his Wicked Hot Chocolate. There are a special blend of spices added in that make all of his products unlike anything else in the candy world. So even though it was literally 106 degrees outside the day I went, I still had to try some. Thankfully Jacques was wise enough to offer a frozen version. It was some of the richest and intense chocolate flavor I have ever had. I am not one who craves chocolate ...…. I will pause for the gasps.......but because it was on my "to eat" list forever I had to try it and now I am done. I do recommend it for anyone who loves chocolate or anything chocolate covered. The shop is adorable and it’s a great place to sample, and find gifts for yourself or loved ones if you are not willing to share.
The only way to end a day like this is with an afternoon nap.
Be sure to plan a day out soon.
http://grimaldis.com/
http://brooklynicecreamfactory.com/
http://www.mrchocolate.com/