For the Skinny on That Tiny House in Mamaroneck: “Seely’s Skinny House” 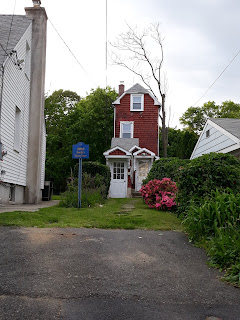 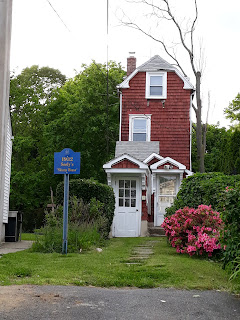 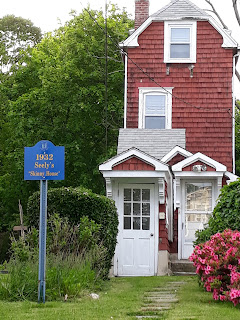 I visit Westchester County on a semi-regular basis. During my most recent trip a couple of months ago, my cousin showed me the skinniest house I have ever seen. It was so small if I had blinked I would have missed it. A few weeks later she emailed me with a link to let me know that this house was a landmark and also available for sale.

Though I have never actually entered inside this house, I have looked it up and seen what it looks like. It appears much larger than I would have guessed from how tiny it looks from the street. It includes many brilliant uses of space such as a built-in-book case. The house is only ten feet across in width and sits on a lot that is only twelve feet wide.

But was is most impressive about this house, has nothing to do with its size. It is its amazing history. The Skinny House, as it is called, was created by Nathan Seely for his family which included wife Lillian and two children. But this marvel use of space wasn’t always how the family lived.

In 1925 Nathan Seely, an African American man, established Seely Brothers Inc. alongside his brother Willard. This construction company built single family homes, duplexes, and apartment buildings all for African American clients. Seely was one of the first to do so. He was also extreme successful. That is until the Great Depression hit in 1929. It hit Seely especially hard. His family had to live their seven room home in 1930.

However, Seely didn’t let his misfortune stop his creativity. His so-called Skinny house was the result. Ironically the parcel of land where the Skinny House lies was part of the land originally owned by Nathan Seely. It was given to him by his neighbors, the Santangelo family. They would become the only other family to own the Skinny House after they purchased in it 1988.

A master architect, Seely built his home around the family’s piano, because he knew it would never fit through the doorways. The aforementioned bookcases where his idea as well. He designed the Skinny House back from the curb so as to allow for more natural light. Built in 1932, the five hundred and fifty square foot home had two bedrooms (although the new real estate listing lists three), a basement, two stories, as well as an attic. With limited finances Mr. Seely used just about anything he could get his hands on to build his home. That included recycled railroad ties and windows. To make the home more stable he fastened steel cables to the ground which are apparently still visible if you are close enough.

At the time of its construction there was no indoor plumbing although now there is a fully functional bathroom which was installed in the 1940s.

If the amazing story of The Skinny House has appealed to you maybe you want to own this piece of history? If so, the good news is that is has a very reasonable asking price of two hundred and seventy-five thousand dollars.

If that seems a bit too steep for your budget, may I recommend purchasing the book Nathan’s granddaughter, Julie L. Seely, wrote entitled: “Skinny House: A Memoir of Family”. I read the brief description on Amazon and it looks intriguing. Ms. Seely details not only the history of the house but of her family and of course her grandfather, whom she sadly never met.

This house may be small but the tale it tells is mighty.