For Find Out Friday - Why Do Our Socks Keep Running Away? 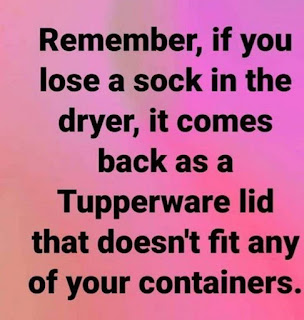 It happens without fail.

No matter how much care I take when doing laundry, I always manage to lose a sock.

It boggles the mind.

I thought this post would mostly result in a rant because surely there isn’t any actual research that could be done about losing socks, right? Wrong!

Clearly many people have suffered this infuriating, albeit minor, problem and have had enough. Through all my research I learned a handful of helpful tidbits and thus will share it with you all now; as answering the universal questions of our lives is the whole point of Find Out Friday in the first place.

First of all, socks were created by the Greeks in eight century B.C. Prior to this post it had never even occurred to me to look into their origin.

Secondly, it has been estimated (by people that take this topic much more serious than I do) that we lose about fifteen socks a year; which equates to over a thousand during our lifetimes.

Thirdly, there are many life hacks for avoiding such problems as a disappearing sock. The video below promotes an invention called the SockDock and I have to admit it peaked my interest enough to be compelled to share it.

Fourthly, this is problem that frustrates the world which I suppose explains why there are scientists who have devised a formula for this largely first world problem. It is called the Sock Lost Index. It was devised to find out why we are losing our socks, not necessarily where they go when they disappear. This study was funded by Samsung to celebrate the launch of their new AddWash machine, which features the ability to put individual items in, midway through a wash cycle in a special compartment.

The formula equals the sum of whether or not pockets were checked, sleeves and socks were unrolled, as well as if all clothes had been turned inside out before a wash was begun. The results indicated that the larger the load of wash, the higher the likelihood of socks disappearing. The most common reasons for missing socks included: falling behind furniture near the laundry area, socks mistakenly being divided between washes, having been blown away on outside clothing lines, and even being paired up with a sock that was not its actual match.

Lastly, but most importantly, there is an explanation for where our socks go!!!

It honestly never occurred to me that there would be a reason for why we lose our socks except for the fact that the sock Gods are pranksters and like making us loathe a chore we cannot avoid.

Actually it appears there are two places the socks can vanish.

The first location has to do with your washing machine. If you have a front loader (I do not) socks can inadvertently fall into the drum. Between the heat and rotations the machine uses during a cycle, small items of clothing (i.e. socks) can also fall unto the wastewater hose. If there is a hole in your hose it could also create a leak.

For top loading machines, socks can easily vanish into the small space between the metal wash basket and the actual interior of the machine. That space is so small and often dark to notice if anything has been moved there during the course of a wash.

It appears washing machines are the enemy of our socks. According to an engineer at GE, the only way socks or other small items of clothing can disappear in the dryer is if the lint trap has not been properly installed. But since lint build up can cause fires this would be the first thing I would double check if sock vanishing seems to happen more often than not in your home.

While losing an occasional sock or two is annoying, it is not the only household item that seems to want to play hide and seek. There are those pesky Tupperware lids that never seem to match their corresponding containers! But I suppose that remains a mystery for another day.