For the Benefits of My Never Ending Inquires: “The Bennett” 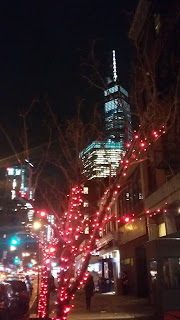 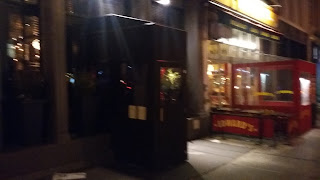 Sometimes the universe gives you an answer before you even ask the question. Since I ask LOTS of questions, as I am always researching some place or another, making a list and checking it twice, as I plan out my days, months, and years, basically my whole life. I am not one to sit around and wait for answers. That is a sure fire way to end up as a procrastinator.
On the rare occasions where I try to just go with the swing of things, nothing seems to happen, especially for those around me. My uncle likes to say that if it weren’t for me he wouldn’t leave his house. I am sure that is only mildly true. He certainly wouldn’t eat as good as he does when he is with me that I am sure of.
So you see I always need a plan of attack. Really just some vague idea of what I want to do. It appears that blogging has become my mass calling. I am proud of such a feat even more so on the days when a blessed blog bombshell falls out of the sky. Not unlike what happened in Henny Penny.
A few weeks ago I was minding my own business knee deep in some random train of thought when I got an email from a familiar name. I instantly recognized her as a contact for a bar I had been trying to go to around my birthday in December. I never ended up going to Dear Irving, but it is still floating around the back of my head as an enticing venue I would like to visit. However this time we would be discussing my trying out the brand new venue, The Bennett. 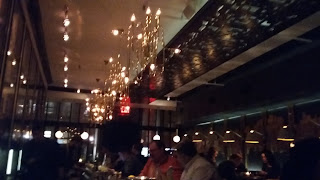 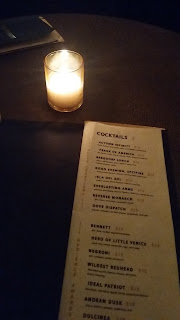 The Bennett is a bar that recently (in November 2015) opened in Tribeca and my contact was the first to bring it to my attention. The only review I had seen was in Time Out New York magazine and I only skimmed it. I wanted to go into this with a clear mind.
I had no idea what it would look like. No clue as to what I feel once inside. From the outside it is a non-descript dark building that has those doors blocking out the winter weather of New York. It provided the perfect transformative entrance into The Bennett. Once I stepped inside it was like I woke up in Oz.
I was seated immediately in the back booths that sat high towards the sky. The smallish venue had the absolute best lighting I’ve ever seen. The many gold fixtures were not only gorgeous; they provided a yellowish light that was neither too bright nor dim. The temperature was right and despite a limited number of tables everyone seemed to find a spot. There wasn’t any overcrowding or anyone who had to stand two or three rows deep at the bar. Everyone had a seat and looked perfectly at home. In fact after only a few mere seconds I felt, as this was my new home. I could see myself going back time after time feeling as welcome as I did right then. Sam, Frasier, and Norm had Cheers, but I have The Bennett.
Online it is described as an “upscale bar for artful cocktails and food in a rich, retro space”. I would like to add that the wonderful staff only enhanced the glamorous style. Every time I had to hit the button to order food or drinks (yes it is as much fun as it sounds) we were served within seconds. To boot the location was greatly accessible from anywhere in the city. It also provided another idea for my future to-do list, as Edward’s is next door. 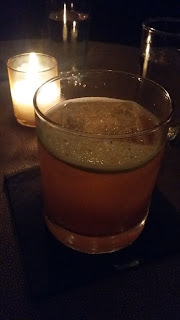 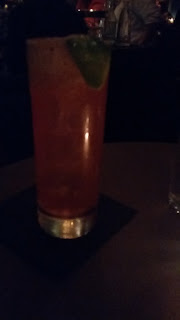 My lucky guest and I began with the drinks. I had the Autumn Infinity, which was my first taste of brandy. Overall it was like drinking a delicious apple pie that had been spiked with alcohol. My friend ordered the spicy Dove Dispatch, which I wouldn’t have minded drinking in the least bit. Both were very unique creations as is the signature of their creator Meaghan Dorman. Alcohol here falls into two groups: original house creations and audience awards that are popular at the two existing establishments. Of course they still have a full bar to accommodate any requests. But I had to get something that I wouldn’t find anywhere else. Otherwise what was I doing here? 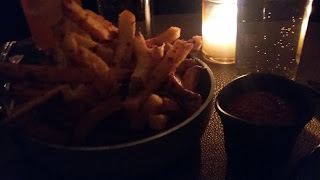 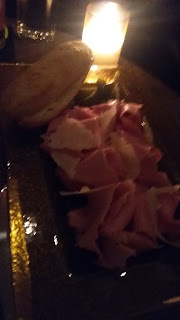 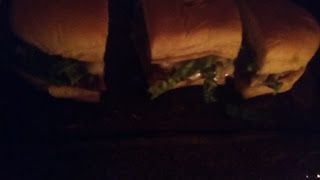 After a short while it was time to order food. We had: Almost Famous Fries (with Aleppo, Claire’s ketchup), The Bennett Burger (with American wagyu beef, cheddar, shredded lettuce, dill pickles, Dijon, Claire’s ketchup, buttered potato roll), and the Sliced Parisian Ham (with small pickles pecorino ribbons, butter, baguette, fancy mustard, two black pepper twists).
Chef Ricky King is no slouch so when deciding on the kinds of bar fare they would serve created a variety where there is no food category to be missed. For those who prefer sweets or savory there is something for everyone. I loved that they were bite size snacks that were just right for this venue. I mean with a great drink, good company, in a nice place, serving you food you can just pop in your mouth, you end up with a marvelous experience. It was such a fun night out.
As I mentioned the food was great, each dish in their own way was better than the next. The fries were a little spicy but cooked to perfection. The burger was also a crowd pleaser. But for me it was the ham that stole the show. I NEVER eat ham. I do not care for it. I don’t like the cold cut or the cooked main dish my family tries to get me to eat every Easter. But something about this ham was special. I loved the presentation. I loved the condiments and garnishes provided. It was a complete meal within itself. The irony is that once I was home and looked up the names of what I ordered again I realized that the ham was called Parisian Ham. Make no mistake EVERYTHING that is related to Paris in name or concept I love. It is a city I hope to live part time in and CANNOT wait to visit again soon. No wonder this ham and I got along so well.
As I looked over the menu again I realized I forgot to order the ricotta beignets! I am truly kicking myself for this gaffe. At the time I was so full I didn’t even miss them until now. And now I REALLY miss them.
If I had to critique one thing it would have to be the bathroom. It might sound trite but I felt like I was going in a pitch-black closet. The door wasn’t providing the kind of security I would have preferred. Also the darkness didn’t allow for the close attention to the hot water coming out of the faucet. It didn’t really match the venue in any way.
Prior to this offer the only other review that was initiated by a venue was Resette (http://thequeenoff-ckingeverything.blogspot.com/2015/08/for-review-by-request-resette.html), an Italian eatery in Midtown. That was another delicious meal in my book and I wouldn’t have gotten to experience that if not for their tweets to me.
I openly encourage all restaurants, hotels, plays, and event attractions out there to feel free to ask for a review. The invitation may be the first step to a beautiful friendship. But buyers’ beware- my opinions are honest to a fault.
Now I turn my attention to Dear Irving and hope to visit that next and eventually sister bar Raines Law Room.
This is going to be my year.
I called it back in December (http://thequeenoff-ckingeverything.blogspot.com/2015_12_01_archive.html).
It’s already off to a great start. I can’t wait to see what happens next. We still have eleven months left to go.
For More Information:
http://www.thebennettbar.com/
http://www.timeout.com/newyork/bars/the-bennett
http://www.dearirving.com/
http://www.timeout.com/newyork/bars/dear-irving
http://www.raineslawroom.com
http://www.timeout.com/newyork/bars/raines-law-room
https://www.starchefs.com/cook/chefs/bio/meaghan-dorman
http://www.mckittrickhotel.com/#McKittrick
http://www.edwardsnyc.com/