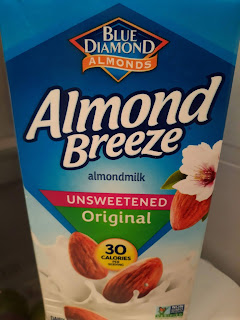 Despite my affinity for cheese and other dairy products, occasionally (actually a few times a week) I like to go dairy-free.

During those times I rely heavily on my favorite brand of almond milk, as seen in the picture above.

Though I know there is no dairy in this product, I constantly wonder: “how does one milk an almond”?

Logically I am aware that no actually “milking” is taking place.

I also know that almond milk can be made at home, although I have zero interest in attempting to make it despite my love of spending time in my kitchen.

So, what is the actual process?

How long does it take?

When / where / who was the first to successful develop this product?

When talking about this kind of “milk” what we are really talking about is plant juices that resemble and can be used in the same ways as dairy milk. Plant like juice has been described as milk since about 1200 A.D. The first mentions can be found in a Baghdadi cookbook in the thirteenth century as well as an Egyptian cookbook from the fourteenth century. It was first mentioned in the England in 1390.

By the fifteenth century, almonds and almond milk were prevalent in most recipes and cookbooks.

Almonds themselves were originally, naturally found in the Middle East, India, and North Africa. They were first brought to Southern Europe over a thousand years ago and America in the beginning of the nineteenth century.

Just like in modern times, cultures who have historically been known for making almond milk use it for the same reasons we do today; namely that it is more easy to digest.

But there are other pros.

During the thirteenth and fourteenth centuries, almonds were plentiful and their milk didn’t spoil in the heat, as there were obviously no refrigeration.

Almond milk was also useful for during times of religious celebrations when animal products are limited or prohibited like Lent or Ramadan.

Those who could not afford cattle or their milk, might have more access to plentiful almonds in their native regions.

Despite the centuries old tradition and popularity of almond milk, it seems to have gone to the waste side during much of the nineteenth century. As more modern inventions for storing fresh meat and dairy became more readily available, those who could afford it and digest it, didn’t seem to need to focus on the more stomach friendly beverage.

That all stopped in 2008, when a company called “Blue Diamond” decided to bring back a blast from the past. These almond growers began promoting almond milk as a viable alternative for anyone who used milk. They argued that the health benefits and taste were by far better than that of soy milk which was really the only other popular non-milk on the shelves at the time. Now as you know, you can find many other non-milks such as oat, rice, or coconut, just about anywhere you shop.

As for the actual process of making almond milk, it is relatively simple. Since almonds naturally have a lot of healthy fats, the juice they produces is creamy. The almonds are soaked in water to produce that juice. Essentially the longer you soak the almonds the creamier the milk will be. Once the almonds are drained and rinsed, after being soaked, they are ground with fresh water. The result is almond milk.

I am a fan of using almond milk in everything from my cereal, coffee, and have even been known to make a yummy Mac and cheese with it. I suppose I will continue to do so until avocado milk becomes a thing.