For Find Out Friday - Why Does My Pizza Come with a Table? 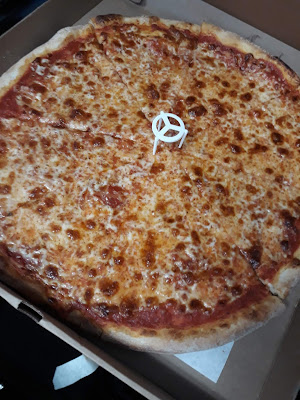 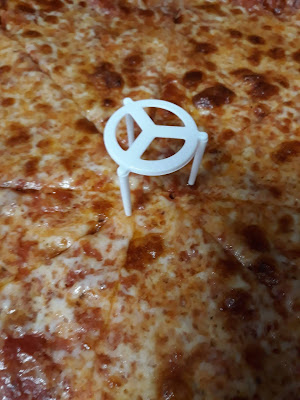 Every Friday is like Groundhog Day in my house.

Meaning that I celebrate a weekly holiday that I created called #pizzaFriday.

Yes, I usually eat pizza every Friday and have long before I started sharing that tidbit on social media.

Pizza is my most favorite food and I can always get one to fit my mood.

In recent years it seems that the world has also jumped on the pizza bandwagon and there are pizzas with literally any toppings you can dream up.

So every week, after making the agonizing decision about where to order or pick-up pizza from, my next greatest challenge is trying to squeeze all that deliciousness into the perfect photo.

But before I can attempt to capture the wonder that will be my meal, I have to remove the white plastic table like object stuck in the center of my pizza.

It annoys me every time.

When I was little I use to take them, wash them, and use them as actual tables in my Barbie’s house. I was always very creative and didn’t like anything to go to waste. For that matter, I also use to use these very small, round plastic Tupperware containers my mother had as car seats in my Barbie’s car. I would put Barbie’s babies in there and found that the seatbelt fit nicely around those containers. I have been a visionary for a long time, yes I know.

I know logically these “tables” serve a purpose, which I am assuming is to keep the cheese in place. But it is very unattractive.

I have long wondered how and when this tradition began.

Now, luckily you don’t have to wonder anymore.

Officially they are called “Pizza Savers” and aside from holding the cheese in place there are also meant to hold the box (now hot from the pizza fresh from the oven) up so that it doesn’t crash onto the freshly made pie.

The woman (who I am confident also ate pizza every Friday) behind the invention was Carmela Vitale, who was from Dix Hills (Long Island) New York. In 1983, Mrs. Vitale filed for a patent which included a detailed drawing of her creation (see first link below) and called it a “Package Saver”. According to that paperwork, she said:

"Delivery products require a relatively inexpensive and disposable box or carton. Cartons of this type, and particularly those used to deliver pizza pies or large cakes or pies, comprise boxes with relatively large covers formed of inexpensive board material. Due to the quality of the board and their large size, there is a tendency of the covers to sag or to be easily depressed at their center portions so that they may damage or mark the pies or cakes during storage or delivery.”

Package Savers were to be made to stand temperatures as high as five hundred degrees.

Her patent was approved two years later on February 12th, 1985. As I am currently in the process of filing my own trademark, waiting two years for approval from the Federal government isn’t really uncommon.

It appears shortly after the patent was granted, it became the standard across the country.

What’s really interesting about this story is who Mrs. Vitale was.

She was a wife and mother and apparently very active in her local city council. She had no background in science or engineering. She also never seemed to manufacture the invention she created, though it is estimated that it would cost less than a dollar to make but you would need the right equipment of course.

In 1993, less than ten years after she first filed for her patent, it lapsed when she failed to pay the patent renewal fee after being reminded the year before.

Since then countless people have filed patents based off of her idea. Many companies now continue to make and sell the Pizza Savers.

So what did she do with the patent?

Why is was her contribution to our every day lives not common knowledge?

I guess some mysteries are just beyond our grasp.

All I know for sure is that from now on, every Friday, I will think of her and be grateful for her wisdom that ensures my pizza satisfaction.