For Find Out Friday - Why Are We Celebrating Christmas in July? 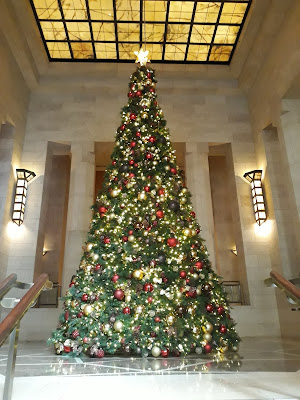 I took this picture was taken at the Four Seasons in NYC on December 28, 2019.

July is ten days in and I have been hearing about or seeing Christmas type images or phrases since the end of June.

I have been wondering for a long time now; Why is there such a thing as “Christmas in July”?

There are actually two parts to my question, why if at all, and why not March, May, or August?

If we need to celebrate Christmas more than once a year (and I am not entirely opposed) than why again in July? If anything June makes the most sense to me because it’s the six month mark.

Through my research I found out a lot of information but no one seems to have a consensus on what the true answer is. Every story I have read seems to be plausible so I will share them all with you.

What we know for sure is that the phrase “Christmas in July” dates back to a French opera, “Werther” from 1892 that premiered in Chicago and NYC in 1894.

After that there are many answers.

Some believe that it was a Hollywood movie called “Christmas in July” that came out in 1940 that made the phrase popular. I had never heard of it. Apparently the plot surrounds a man named Jimmy who is struggling in his advertising career while trying to marry his love Betty. This movie was so successful that the U.S. Postal Office used it in its promotions during the 1944-45 to encourage people to send early Christmas cards and presents to soldiers serving in World War II.

Then there are the stories that take place in the mountains.

One began at the Keystone Camp for girls in North Carolina in 1933. That was the first year they celebrated “Christmas in July” at the behest of camp director Fannie Holt. Presents were made and exchanged, hot cocoa was served, carols were sung, and Santa himself even showed up. Today the celebrations are more inclusive featuring other holidays such as Hanukkah, Halloween, and Easter.

Then there is the story of those who were in the Blue Mountains in Sydney, Australia in the 1980s and struck by the sight of snow (or stranded in a blizzard) and decided to celebrate. I have heard a similar version of this story taking place in Yellowstone Park in the 1930s or 1940s. The details vary and are vague at best.

But what makes the most sense to me, is that in the Southern Hemisphere, winter takes place in the summer. So for those who long to have a “white Christmas” this is when they celebrate. Countries like Australia, New Zealand, and South Africa are known to have Christmas celebrations in the summer.
Those of us in the U.S. who can only see family members during their summer vacations may also wish to partake in “Christmas in July” activities.

Now of course it is also used as a promotional stunt to bring upon a splurge of early shopping for the season and as a reason to play Christmas movies on tv.

Earlier this year, during a previous “Find Out Friday”, I asked the question: “When Did We Begin Counting Down to Christmas?” I have to say I expected to answer to tonight’s question to also somehow connect back to the Hallmark Channel. I am surprised and delighted to be wrong. They are just celebrating a holiday that all of the world seems to want to have a hand in.