For a Pizza That’s Nothing to Cluck At: “Noble Kitchen and Cocktails” 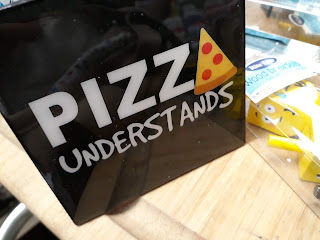 If an average picture is worth a thousand words, than how many does one that makes you drool, accrue?

In this age of constant social media, I feel like that phrase needs to be updated. Perhaps it should be “a proper foodie Instagram is worth the effort to track down that meal”. Sure it doesn’t roll right off the tongue but the sentiment behind it is certainly true. After a few short clicks, I had once again expanded my to do list.

My favorite food group of all time is pizza. Pizza is now trendy. You will see it as a design on many t-shirts and other paraphernalia. In fact, the picture above is of a sign I found in a card store. I was very tempted to buy it but I have to practice setting some boundaries.

I see pickles are headed towards this same upward trend now as well.

But back to pizza. I love it and yes I believe it loves me right back. It can do no wrong in my eyes and even the slices I have tried and ate without satisfaction a la the infamous Lucali’s (https://bit.ly/2AYLlxC), have been worth the effort.

One late night as I scrolled through my instagram I saw a photo of something I didn’t immediately understand. As I explored the images further I realized I was looking at a kind of pizza I had never come across before: the chicken parmesan pizza.

Once I discovered where it was from and found out to my delight that it was in a reasonable distance from my house, it was added to my pizza to do list.

Now I have proudly crossed it off. 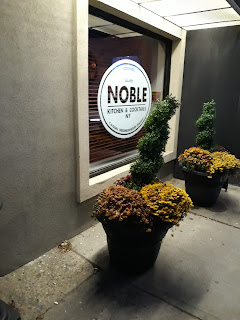 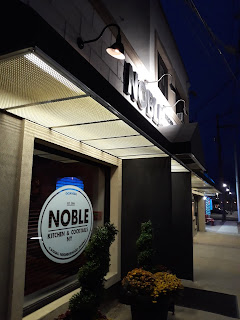 Noble Kitchen and Cocktails is right around the corner from the former house of one of my great aunts. It is a place that both my mother and I spent a great deal of time at during our childhoods. We even made it a point to drive by on our way to dinner.

Noble is in the former location of Lawson’s Pub, in a prominent spot in Oceanside, New York. It is in Nassau County, Long Island. 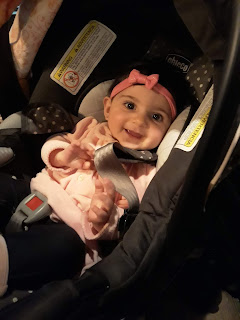 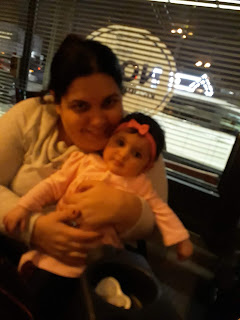 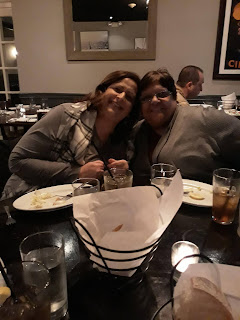 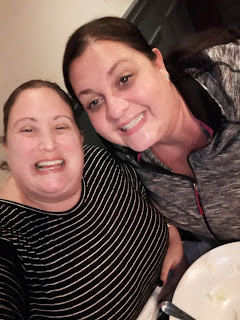 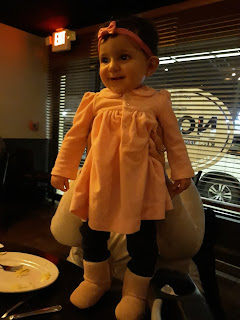 As it happens I have a lot of family still nearby so they were invited out for a girls night to try out this new type of pizza with me. It was also baby’s first blog. You’ll recognize her from my Thanksgiving post (https://bit.ly/2E8l9nh), so that made it even more special. 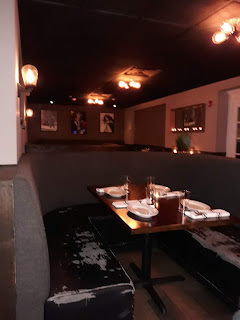 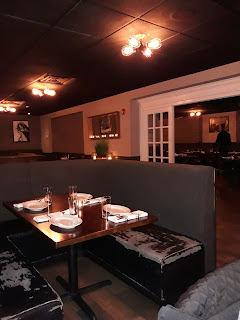 The restaurant opens at five p.m. for dinner so thats what time my reservation was for. I was happy that they were open a few minutes early unlike some Manhattan establishments with similar hours.

The restaurant has a cozy vibe. There is a large bar which seemed to have a loyal, local bunch of devotees. Yes, it appeared to be a place where they could easily know your name.

The space is large, dark, but inviting. The staff was all very welcoming including our waiter, who for some reason reminded me of Erich Bergen from Madame Secretary.

Unknowingly I met the owner, Rob DiSanto, who checked in on us several times to make sure everything was up to par. That kind of attention to his customers is why this place will be around for many years to come.

Noble Kitchen and Cocktails opened in back in December of 2016 and has a chef (Jonny Manhattan Hancox), who has worked at another restaurant I have visited; Carbone (https://bit.ly/2Pq0FZ7). But gladly I enjoyed this meal much more than that one from 2015. 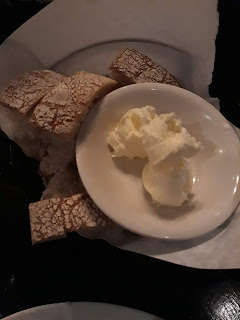 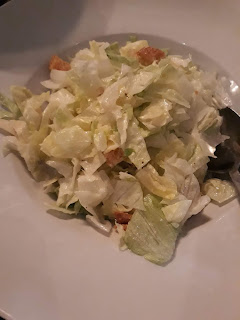 Since we knew what we were eating, the only thing we had to choose was our beverages and a side Caesar salad to accompany our entree, which came out shortly after.

When the chicken parm pizza came to our table I couldn’t believe the weight it seemed to be carrying. But the best part (pre tasting it) was that when it was cut into you heard an audible crunch! I love a good crunch. It is why I am always sticking chips, or Cheez-Its into my sandwiches. Better yet, it is why I insist on putting Pancho breadcrumbs on anything I can. 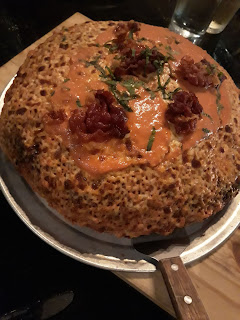 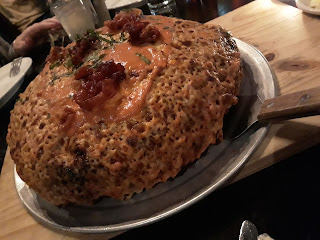 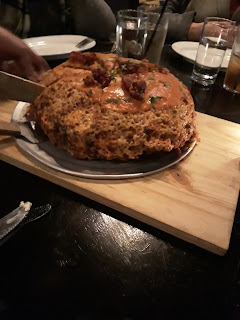 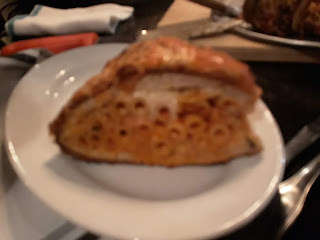 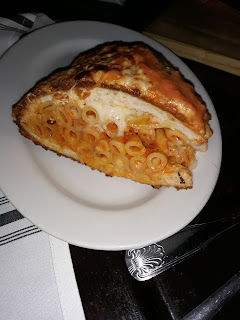 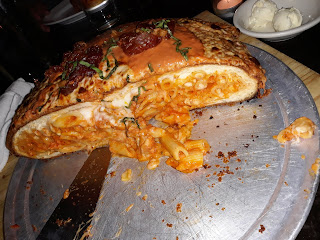 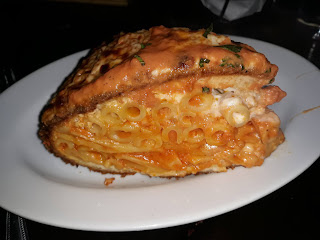 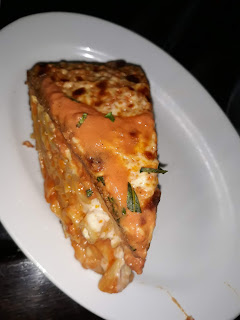 As excited as the sound of the crunchy outside was, I was more eager to take the perfect set of pictures to attempt to capture what was on my plate.

While it is called a pizza and is shaped like one, this is not technically a pizza. The entire outside is two large pieces of chicken cutlet parmesan that was baked together. On the inside, it is stuffed with penne a la vodka. This is the classic version of this dish. Please note there are four other varieties including one with buffalo sauce, one with vodka sauce on the outside, one with chicken paillard, and one with marsala sauce. All are topped with bacon.

At the time I placed my order I wasn’t even aware there were other choices. I don’t know if I would have changed it if I could have.

Being that the outside was so crispy, I have to say that the chicken was a little bit dry. But the flavor was amazing especially the pasta. The women at my table said they would go back and just order that. However, we all really liked it and there was enough left over to take some home, which I gladly did.

Just so you know, the chicken parm pizza (in all its varieties) requires twenty-four hour notice and costs eighty dollars. Before you shake your head at the price, please realize it serves six comfortably and is the same price as an entree that had both chicken parm and pasta. In that perspective, it is not a costly sum.

So round up your troops and make a reservation.